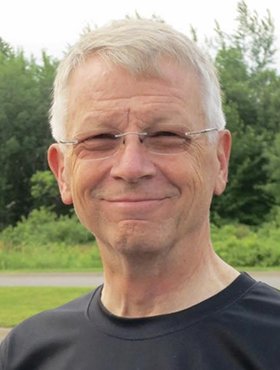 It is with heavy hearts that we announce the passing of Christopher (Chris) Freeborn, beloved husband of Dawna Michaud. Chris passed peacefully at his home in Calgary, AB, on Friday, September 11, 2020 surrounded by his wife, daughters, son-in-law, and grandsons.

Chris was born in Edmonton, AB, on August 8, 1949, the son of Winifred Elizabeth Freeborn (an English war bride), and James Switzer Freeborn (a First Lieutenant in the Canadian Army, who served in the Royal Canadian Artillery throughout WWII). Chris was a brilliant student throughout his childhood, and he graduated with his Bachelor of Engineering (Chemical) degree from the University of Alberta in 1970.

Chris raised his children in Fort Saskatchewan, AB, and spent a long and successful career working for Imperial Oil (ExxonMobil). He travelled the world throughout his career, eventually retiring in Calgary, AB, where he was able to engage in countless creative projects. Chris was a talented photographer and videographer, and he shared his skills generously, providing family, friends, colleagues, and not-for-profit organizations with extensive albums of beautiful memories, shot in various locations around the world. Chris was naturally athletic, and throughout his life he enjoyed cycling, curling, running, golf, skiing, squash, and various water sports, among other activities. An engineer, a writer, an adventurer, a creative artist, an amateur athlete, and a devoted friend and family man, Chris had a positive impact on all those who knew him.

Chris was known for his sense of humour, humility, intelligence, and caring and compassionate nature. He connected deeply with people young and old, and was a mentor and confidant for many. Chris’s wide circle of family and friends adored him; he remembered every birthday, anniversary, and significant events that happened in his friends’ and family members’ lives, and he cultivated friendships that lasted decades.

Chris’s family would like to thank all those who supported them through his sudden diagnosis and devastating illness. As he was in life, Chris was gentle, loving, and kind throughout his illness, and he never lost his wonderful sense of humor and quick wit.

Chris is survived by his wife Dawna, his children Paige (Adrian) and Chelsea (Jorma); his grandsons, Etienne and Zayd; his brother Robert (Rene); and his nephews, Geoff and Jeremy. He was predeceased by his mother and father.

The family plans on hosting an online celebration of his life this fall, to be followed by an in-person celebration in Calgary, AB, next summer. Condolences, memories and photos may be shared and viewed on Chris’s obituary at www.McInnisandHolloway.com.

Share Your Memory of
Christopher
Upload Your Memory View All Memories
Be the first to upload a memory!