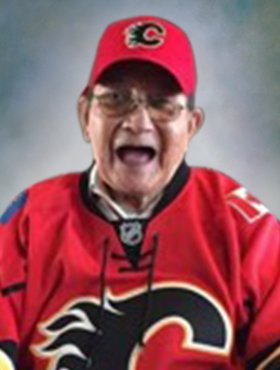 Russell Ts’ido T’asina “Poor  Boy” Big Crow of Tsuut’ina Nation, AB passed away peacefully at home surrounded by his family and grandchildren on Tuesday, Sept 28, 2020 at 10:45pm at the age of 92 years old.

Born to Hilda and George Big Crow on July 12, 1928, Grandpa lived a life of humor and sharing his traditional stories based on his life experiences from his childhood.  Grandpa was a Holyman and was one of the original chicken dancers and was a champion Chicken Dancer who danced in Banff, Piikani, Rocky Boy, Calgary Stampede, Morley, Hobbema, Siksika and his home Tsuut’ina Nation.

Grandpa was a humble, kind man with a great sense of humor right till the very end. He was a rancher cowboy at heart and stayed true to his Anglican religion by attending services every Sunday.  Every year at the Tsuut’ina Nation Celebrations, Grandpa would be seen camping in his favorite spot. As a family, we are very blessed that numerous people from various Nation’s shared the love and admiration that we had for Grandpa. It brings us great comfort to have been able to share his love with all of those who knew and cared for him as well. Grandpa had many joyous stories to share and often mentioned his loneness due to missing many of his family and friends that have passed on.  We the family, are very blessed and honored for the sharing of honesty Grandpa shared with everyone he spoke to. Grandpa will be missed tremendously.

The family would like to thank Tsuut’ina Health Center, Calgary Focus on Caring, Rexi, Sam, Emma, Glenda, Joanne and Karen for their continuous support to Grandpa.

Share Your Memory of
Russell
Upload Your Memory View All Memories
Be the first to upload a memory!
Share A Memory
Send Flowers