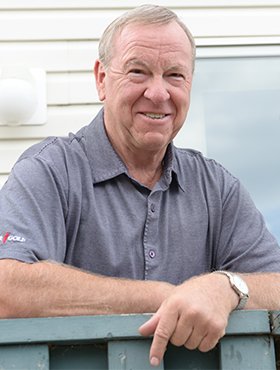 It is with aching hearts and sadness that we announce the passing of Gordon Alan Christensen, a man who was loved by so many and will be missed deeply. Gord passed away on Saturday, October 24, 2020 at the age of 73 years, after a long battle with mesothelioma.

Gord was born in Edinburgh on December 2, 1946. At three months, he and his mother Nancy (a war bride) sailed to Canada, to reunite with his dad Chris, who was stationed at the airbase in Calgary. As a young boy, Gord lived on several airbases all over Canada.

Sports were a dominant theme, with hockey being his passion. He played in the Central Pro league as a young man. Unfortunately, his professional hockey career was cut short due to a bad bout of pneumonia, and he moved to a business career.

Gord met his first wife, Anne, in 1971, in Ottawa, and they had twenty-seven very happy years together, bringing up four children, before Anne passed in 1998. Gord was lucky enough to have a second love, as he met and then married Sally in 2009. They enjoyed travelling together, especially to the U.S., but sadly Sally passed in 2012.

He will be forever missed by his vast number of friends, several of whom have referred to him as a brother. Through work, hockey and golf, his lasting friendships were a source of great joy and happiness. There are too many to name but know that we saw how much Gord was loved over his lifetime and how meaningful that was to him during his last few months.

A Celebration of Life will be planned for 2021. Condolences, memories and photos may be shared and viewed on Gordon’s obituary at www.McInnisandHolloway.com.

If family and friends so desire, in lieu of memorial tributes, family has asked that you may contribute to planting a tree in the Ann & Sandy Cross Conservation Area by McInnis and Holloway Funeral Homes.

It is with heartfelt thanks and appreciation we recognize all those who helped our family through the crazy journey of mesothelioma, especially Dr. Lim at South Calgary and Dr. Bebb and his staff at the Tom Baker Cancer Clinic. They helped Gord pass the three-year mark, which at times we were not sure would happen. Thanks to Toby and the palliative home care staff who helped us with our time at home. To the staff at Chinook Hospice, your kindness and love helped Dad be restful and peaceful during his last few weeks. May he rest in peace with all of those who have passed before him.

If family and friends so desire, in lieu of memorial tributes, family has asked that you may contribute to planting a tree in the Ann & Sandy Cross Conservation Area by McInnis and Holloway Funeral Homes.