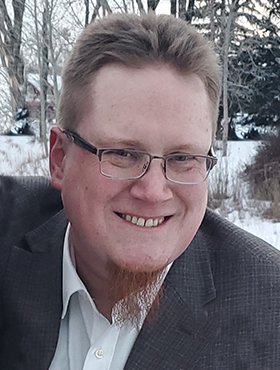 Ryan Michael Chisholm, beloved husband of Lance O’Sullivan, of Calgary, AB, passed away on Saturday, October 24, 2020 at the age of 37 years.

Ryan was taken way too young. He was smart and funny and loved by all.

We did not know all of his many friends in the online gaming, VR, and Fur Affinity communities. We were overwhelmed by the messages. We did see, and understand we saw only a small percentage. We are comforted by the number of people that Ryan (Glaide) touched, and will use that to help us through this. Hug someone close to you for Glaide/Unkie.

Ryan was sensitive and could see things in people that most of us miss, even though he showed a gruff exterior. He particularly liked kids and animals. He never met a dog that he didn’t love. He lived with Old English Sheepdogs his whole life. Tuk misses him terribly.

Ryan had many talents, and when he wanted to he could excel. Some are playing the cello (don’t know where he got the talent in this family), welding (he had a knack for this and was the top of his class), cooking (he learned on his own and excelled at many dishes), and being a loyal friend.

We will forever miss Ryan but are better for having shared him with the world. Share your love and give someone a hug today. Ryan would have wanted that and it will make him happy.

We love you Buddy.

He will be sorely missed by his loving partner, Lance O’Sullivan; his parents Grace and Bill Chisholm; his brother and sister-in-law, Clayton and Lynn Chisholm and their sons, Travis and Curtis; special friends, David Chicoine and Sean Piche; and his aunts and cousins.

He was predeceased by his loving grandmother Mary Rubiletz. They had a special bond and we believe they will now be looking after each other.

A private service will be held.  Condolences, memories and photos may be shared and viewed on Ryan’s obituary at www.McInnisandHolloway.com.

Share Your Memory of
Ryan (Glaide/Unkie)
Upload Your Memory View All Memories
Be the first to upload a memory!
Share A Memory
Send Flowers