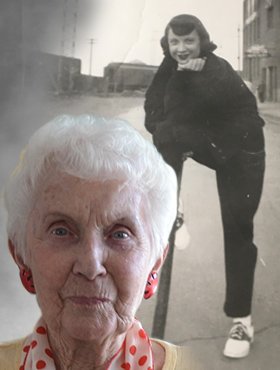 It is with sadness that we announce the death of Hazel Pearl Whittal on Friday, October 30, 2020, of Cochrane, AB, at the age of 87 years following a long battle with a respiratory illness.

Hazel was born and raised in Calgary and was proud to be a Victoria Park “bum”. She lived most of her life in Calgary with short stints in Edmonton, Saskatoon, and Oregon, and most recently, Cochrane.

Hazel worked for the Alberta Wheat Pool for many years and ended her working career in the kitchen at Van Horne School in Calgary. Hazel’s favourite pastime was baking, hence the nickname “Betty Crocker”. She was known to make a mean square, cookie, butter tart and peach pie.

Hazel leaves behind her two daughters Cheryl and Maureen, and her granddaughter Kiley. She also leaves behind her brother-in-law Jack Black, as well as a multitude of nieces and nephews, and a very dear friend Stan Rogowski. Neil, her husband of 62 years, passed in September 2017. Hazel was the youngest of six children of her beloved mother Elizabeth (Betty) and Perry Johnson. She was the last living Johnson sibling.

Hazel and her family were very grateful for the spectacular care she received at the Big Hill Lodge and Points West in Cochrane.

Beyond all else, Hazel valued family, hard work, and a good banter. We will miss her, as will everyone whose lives she brightened.

In keeping with her wishes there will be no memorial service.

Condolences, memories and photos may be shared and viewed on Hazel’s obituary at www.McInnisandHolloway.com.

Share Your Memory of
Hazel
Upload Your Memory View All Memories
Be the first to upload a memory!