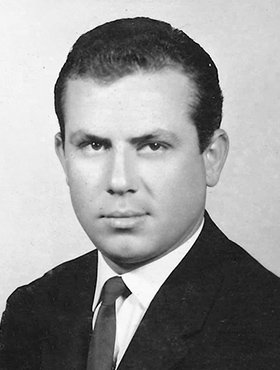 It is with great sadness we announce that Spyros Antoniou, of Calgary, AB, passed away peacefully on Thursday, October 29, 2020 at the age of 80 years, ending his long journey with dementia.

Born in Kanallia, Greece to Lampros and Vasiliki Antoniou, Spyros completed his education in Lamia, Greece before going on to serve as a police officer in the Chorofylaki (predecessor to the Hellenic Police Services). After meeting and falling in love with Panagiota in 1966, he immigrated to Montreal in 1967 to join her. They were married shortly thereafter. In 1978, Spyros and his family moved to Calgary, where they continue to reside. In Calgary, Spyros worked in the restaurant industry, eventually becoming the owner and operator of Volos Pizza, a pizzeria in the Marda Loop area that continues to be run by his son.

When not running his successful pizza business, Spyros enjoyed frequent coffee sessions with his friends in the Greek community, watching WWF wrestling, debating politics and current affairs, gardening, travelling back to Greece to visit family and friends, and spending time with his wife, children and grandchildren. He was also very involved in the Hellenic Greek Orthodox Community of Calgary, including serving as Vice President of the Community for four years, prior to being diagnosed with dementia.

Spyros was the beloved husband of Panagiota Antoniou (nee Makos) for fifty-three years, the devoted father of Lampros (Marcela) and Vasiliki (Mike), and cherished grandfather of Ismenia, Noemi and Dominic.

Spyros will be cremated and his family will honour his memory privately in accordance with his wishes. Condolences and memories may be shared and viewed on Spyros’s obituary at www.McInnisandHolloway.com.  If friends so desire, memorial tributes may be made directly to The Alzheimer Society of Calgary, 800, 7015 Macleod Trail S.W., Calgary, AB, T2H 2K6, Telephone: (403)290-0110, www.alzheimercalgary.com.

Share Your Memory of
Spyros
Upload Your Memory View All Memories
Be the first to upload a memory!
Share A Memory
Send Flowers