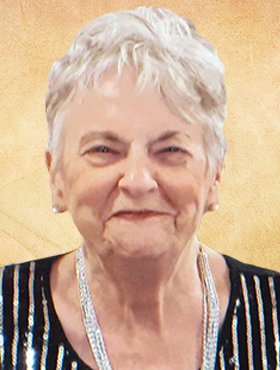 June fought a long hard battle with Adult Hydrocephalus and Alzheimer’s. The last years were very difficult for June. June succumbed to her illness at AgeCare Seton in Calgary, Alberta.

June was born in Bienfait, Saskatchewan. She moved to Calgary, Alberta where she met the man of her dreams Roy Baxter. June had four children Colleen, Debbie, Scott and Mark.  June worked at Canada Post where she was employed for 35 plus years and retired at the age of 62. June was a member of the Royal Canadian Legion and spent many hours playing shuffleboard with her dear friends.  Her most loved moments were those in which she spent with family and friends.   June enjoyed travelling, reading, bingo and the outdoors.
She will be remembered for her great sense of humour, kindness, strength, courage and her very gentle spirit.

Condolences, memories and photos may be shared and viewed on June’s obituary at www.McInnisandHolloway.com. In lieu of flowers, if friends so desire, memorial tributes may be made directly to The Calgary Neurosurgical Foundation, Attention: Adult Hydrocephalus Program, Foothills Medical Centre, 12 floor, 1403 29th Street NW, Calgary, AB T2N 2T9.