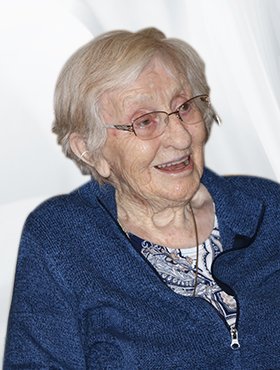 Regretfully, Maria Magdalena Meyer passed away after a short hospitalization due to complications arising from the COVID19 virus.

She grew up in Krefeld, Germany and worked in the family’s milk processing facility where she took pride in her early morning fresh milk bicycle delivery to the young families of her town.  Maria was selected to enroll in a business school where she learned the skills of typing, shorthand and bookkeeping which she used in various businesses during the post war period.  With her husband Ernst Meyer the humble couple immigrated to Canada where Maria’s first job was working as a nanny on a family farm in Ontario.  Language challenged both Maria and Ernst, affectionately called Papa or Papalein, but soon they could manage and migrated across Canada to Vancouver where her brother Joseph had settled. Maria took up housekeeping duties at the prestigious “Hotel Vancouver”.

Maria and Ernst did not have children of their own but they made friends easily and participated in the German-Canadian community. They loved to listen to their many albums of classical music.  She was encouraged by a friend to apply for a BC Government Forestry Accounting position and became a bookkeeper managing the timber resources of the commercial species of the timber resources of BC.  Ernst was an accomplished gardener and worked his entire career with the University of British Columbia in maintaining the extensive grounds of the UBC campus.  Together, they enjoyed trips to Vancouver Island where they contributed flowering plants to their friends Walter and Birgitt Sartisohn’s garden and browsed the beautiful Butchart Gardens.

Travel took them to Hawaii and Germany where they took road trips around Western Europe reacquainting with earlier friends and family. When friends visited Maria was proud to serve a Schwarzwaelder Kirsch Torte (Black Forest Cake) and Ernst would serve Asbach Uralt (Excellent German Brandy). When Ernst retired, they moved from their large garden property and took up condo life.  After Ernst passed away, in 1993, Maria continued living in their condo where she participated in senior’s activities and travelled with a few of her friends.  Andy became her close friend.  They travelled and enjoyed all types of music together until his death (~2000).  A little later she met Frank. Maria and Frank began a decade of travel and life together.  In their later years Maria sold her condo and moved in with Frank, then in 2016 they became residents of an assisted living center where they shared many activities with other seniors.  Maria moved to an assisted living center in Calgary after Frank’s death in 2018 so that Frank’s son and his family could better support her needs. In Calgary, she enjoyed day trips to Banff, sunny afternoons at local parks, Saturday matinee performances at the Calgary Philharmonic, Broadway across Canada and other live theatre events.

Maria is survived by brother Hans and partner Erika Graf, sister Liesel and partner Carl – Heinz Burger of Germany, nieces and nephews, Fred of Nanaimo, B.C., Gitta, Michael, Gabi, Hans-Jurgen, and Judith of Germany; and Frank’s family: Hilary and John Libbrecht, of Drumbo, Ontario; Colin and Marilyn Outtrim, their son Richard, wife Rauchelle and children, Nolan and Lewis of Calgary; son Murray, wife Shawna and their children, Aidan and Hannah of Calgary. She was predeceased by her parents, her brothers Heinz and Joseph; sisters Martha and Paula; nieces Marlene, Barbara; and nephews Ralf and partner Frank Outtrim.

Thanks to the management and staff of “The Maison”, West Vancouver and the “Manor Village at Varsity”, Calgary for their untiring contribution to Maria’s final years, giving her the care she needed and showing respect and dignity as her needs changed.

There will not be a funeral service due to COVID restrictions and as friends and family are so widely scattered.  Maria requested her ashes be interred alongside Frank’s at the Pacific Heritage Cemetery, in Burnaby, British Columbia. Condolences, memories and photos may be shared and viewed on Maria’s obituary at www.McInnisandHolloway.com.