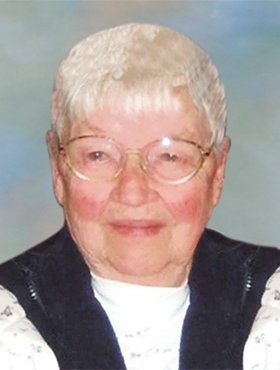 Doris was born to Mike and Mary Hrynuk on December 13, 1926, in Fort Frances, ON, the district of rainy river.

She loved being one of eight children and being raised in “The Bush”. There was always someone to share chores and adventures with, someone to swim with in the summer, cross country ski with in the winter and roam the bush all year round.

Mom found her passion for gardening alongside her mother and siblings in their large family vegetable garden. Her father was employed as a Trackman by the railway, thus as a teen part of her summer job was to polish the brass bells on the trains.

Doris met George Feuchuk, fell in love and in the early years of marriage were both employed in northern Ontario in the Forest product industry.  They enjoyed their stint in a lumber camp, mom as a cook and dad initially as lumberjack and then as a cook (Dad volunteered after the regular cook didn’t turn up  one day). After their time in Geraldton,they moved to Sault Ste. Marie and shared a home with her sister Margaret and family . In 1953 their son Dennis George was born.

The Feuchuk’s then moved to St Clair Avenue in Toronto, where mom stayed home to raise Dennis and worked part time. Their home was always open to friends and relatives. Both George’s brother Joe and sister Jean and families lived just doors from each other, thus providing fun cousin playmates for Dennis.

They continued to live on St Clair Avenue for twenty-five years, meanwhile mom had her dream of living in the bush again realized. She helped George build her someday retirement cottage/home and a huge vegetable garden, near Shelburne, ON.  You would often see family and friends gathering for summer and winter barbecues and pig roasts. The Feuchuk home was always welcoming with beautiful meals, evening card games and a bottomless pot of coffee. Dad could be heard to call out “Dora put on another pot of coffee ”.  Doris loved to try out new recipes along with her traditional pierogies, Holubsti, Borscht and Paska (Easter Bread). Her famous four layer chocolate cake and peanut butter squares are still family favorites.

Sadly for our family George predeceased Dora in 1987. After seven years of continuing to live on her own in The Bush, she moved to Calgary, AB to join Dennis and his family in 1995.

The legacy of Doddi and Grandpa continues with their son Dennis and his wife Angela, and their three children Adam (Teena),  Julia (Peter) Johnson and Erick of Toronto, ON; and six beautiful great-grandchildren Wyatt, Charlotte, Pippa, Evelyne, Greer and Penrhos (Penn).

For now due to Covid we will celebrate mom in our individual ways and look forward to celebrating her life as a family when safe to do so. Mom will be interned next to Dad in Shelburne, ON in the summer of 2021. Condolences, memories and photos may be shared and viewed on Doris’ obituary at www.McInnisandHolloway.com.

If friends so desire, memorial tributes may be made directly to your local foodbank.

Share Your Memory of
Doris
Upload Your Memory View All Memories
Be the first to upload a memory!
Share A Memory
Send Flowers