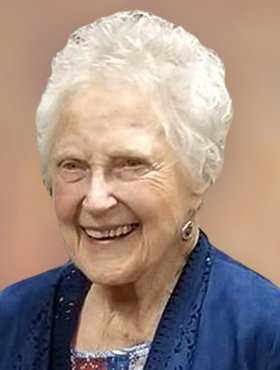 Alice Huggard of Calgary, AB, passed away peacefully on Tuesday, December 8, 2020 at the age of 91 years.

Alice was born in Calgary, AB, to parents, Opal and Charlie McKinnon from the Dalemead area.

She finished her schooling in Calgary at Mount Royal and then continued onto Olds Colleges.

After working for a few years at the Calgary General Hospital, Alice married Jim Huggard of the Balzac area on January 9, 1954 and raised their family in the Dalemead area.

She was a member of the Southern Alberta Pioneers Association, and was a leader of the Bow Valley Beef 4H Club.  Alice enjoyed her travels and her time singing with the Chinook Winds chapter of Sweet Adelines.  She worked for the Stockman’s Memorial Foundation interviewing pioneer ranchers and their families as she loved the ranching history.  One of her favourite past times was being a member of the Indus Curling Club enjoying numerous social events with neighbors and friends in the “snakepit” upstairs in the curling rink. She also participated with the skate-a-thon raising funds for the BVAS.

She is survived by daughters Marilyn (Gordon) Bloye of Bassano, Elaine (Ken) Ogston of Langdon; sons Gordon (Cheryl) Huggard of Langdon, Larry (Kristine) Huggard of Duchess, and her sister Barbara Church of Balzac.

Alice was predeceased by her husband Jim; her two brothers Jim and Neil; and her parents Charlie, and Opal McKinnon.

Alice will be dearly missed by family, friends and neighbors.

Condolences, memories and photos may be shared and viewed on Alice’s obituary at www.McInnisandHolloway.com.   If friends so desire, memorial tributes may be made directly to a charity of your choice.

Share Your Memory of
Alice
Upload Your Memory View All Memories
Be the first to upload a memory!
Share A Memory
Send Flowers