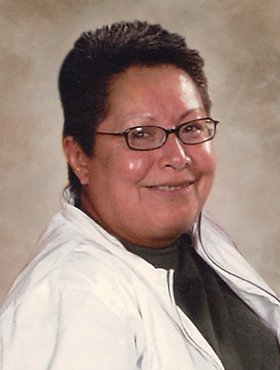 If friends and family so desire, in lieu of flowers donations can be made in memory of Dale to the Siksika Food Bank.

Dale Hinves of Vulcan, AB, was reunited with her loving husband Kenneth Allyn Hinves, on Thursday, December 17, 2020 at the age of 67 years.

Dale was a manager for the Tribal Administration for many years, overseeing numerous departments.  She enjoyed and took pride in the work she did for the Nation.

Dale’s favourite past times included jigsaw puzzles and crosswords. She also had a great love and compassion for animals. Dale spent much of her earlier years on the golf course with her husband Ken. Dale and Ken had a passion for travelling and socializing with their many friends. They also enjoyed spending their winters in their vacation home in Thousand Palms California.

Dale is survived by her daughter Mary-Anne and her son Brent (Tara); her granddaughter Julian, grandson Billy and great-grandson Dante, stepdaughter Diane (Dave) and stepsons, Billy (MJ), and David (Bernice). Dale is also survived by her brothers, Colin, Randy (Caroline), Darcy (Rennie), Jason and Adam (Carla), her sisters, Elaine, Shirley and Rosie (Malcolm); and her special brother Blair; as well as her nieces, nephews, aunts, uncles, cousins, and extended relatives.

A private family visitation will be held at McINNIS & HOLLOWAY (Deerfoot South, 12281 – 40th Street SE, Calgary, AB). There will not be a Burial Service. Dale wished to be cremated.  Condolences, memories and photos may be shared and viewed on Dale’s obituary at www.McInnisandHolloway.com.

If friends and family so desire, in lieu of flowers donations can be made in memory of Dale to the Siksika Food Bank.

Share Your Memory of
Dale
Upload Your Memory View All Memories
Be the first to upload a memory!