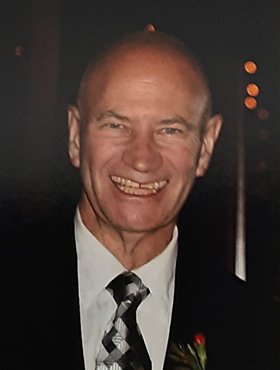 If friends so desire, in lieu of flowers memorial tributes may be made directly to the Canadian Pulmonary Fibrosis Foundation, Attn: Calgary Chapter (47 Squire Bakers Lane, Markham, ON L3P 3G8, Telephone (905) 294-7645, www.cpff.ca

Doug Cageorge, beloved husband of Glenda Hubick of Calgary, AB, passed away on Tuesday, December 22, 2020 at the age of 75 years.

Doug was born in Montreal, QC, to John and Margaret (nee McGiffin) Cageorge. He was the second child and first son of four children. Doug and his siblings grew up in Lachine, QC, where their father was a physician. Summers were spent in the Eastern townships at Knowlton, where Doug followed his parents in their love of golf. In winter, he pursued hockey and played goal on the university team at Sir George Williams (where he was scouted by the Boston Bruins).

Doug’s mother passed away when he was eight years old, and later his father married Mary Beggs who brought her four children to the blended family.

Doug moved to Calgary in 1978 and pursued his work as a chartered accountant. He worked for several companies before going out on his own, specializing in taxation. Doug loved his work and was well respected in this field.

Doug’s love of golf continued all his life. He regularly travelled to Arizona with his best friend and wife, Glenda, to enjoy the warm sun and golfing during the winter months. A long-time member of the Silver Springs Golf & Country Club, Doug played his last game there in September 2020, hooked to an oxygen tank. “CA Squared’s” family thanks the members of his golf group for their great friendship and companionship over the years.

Doug was well known for his financial prudence, dry sense of humour, love of cars, golf attire, and the latest golf equipment innovations. Doug was a loving father and greatly enjoyed time spent with his grandchildren.

Besides his loving wife, Doug is survived by his son Sean (Jennifer) and daughter Brynn (Wade); his grandchildren, Chase, Morgan, Dashiell and Daegan; his sister Joanne Lawrence,  and his brothers, David (Sharon) and Robert (Marsha). He is also survived by Glenda’s sons, Clayton (Neasreen) and Chris (Chris) and Clayton’s daughters, Vienna and Hannah; as well as numerous cousins, nephews, and nieces across Canada and the USA.

There is no service planned due to COVID-19 restrictions. A Celebration of life may be held at a future date, but, in the meantime, raise a glass (rum, if you have it) in Doug’s memory. He will be missed. Condolences, memories and photos may be shared and viewed on Doug’s obituary at www.McInnisandHolloway.com.

If friends so desire, in lieu of flowers memorial tributes may be made directly to the Canadian Pulmonary Fibrosis Foundation, Attn: Calgary Chapter (47 Squire Bakers Lane, Markham, ON L3P 3G8, Telephone (905) 294-7645, www.cpff.ca.

Share Your Memory of
John (Doug)
Upload Your Memory View All Memories
Be the first to upload a memory!