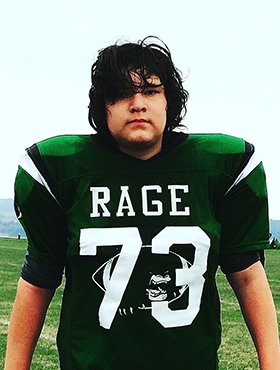 Phoenix was an avid PC gamer, his favourite game “Rust”. Phoenix had friends all over the world whom he enjoyed gaming with. Phoenix also enjoyed editing his plays and publishing them on his YouTube channel. When he wasn’t online, he also enjoyed watching anime with his online friends or with his sister Marnie, mom, and cousins. His favourite anime was “Your Lie in April”, it would always bring tears to his eyes, but he still loved it. Phoenix also participated in high school football. He was an excellent defensive lineman for Rockyview’s “Rage”, and for the George McDougall “Mustangs”. Phoenix also enjoyed swimming, shopping and just being an awesome big brother to his sisters and to his cousins, Zandel and Zyran. He was known for being a gentle giant (6’3”) and a man of few words. He was also very kind, timid and very humorous when he wanted to be.

Phoenix is survived by his mom Carla Fox, his dad James Lynch, and his sisters, Marnie, Amberlynn, and Kilynn Fox; his grandparents, Myrna Dixon, Benny Francis, and Brian Fox; his favourite uncle Orrin Fox, and his favourite cousins, Zandel and Zyran P. Dixon. He is also survived by his other uncles, Lonnie Fox, Clinton (Eldrena), Lee Rider; and his Aunties, Mervina Dixon and Natasha (Kelsey) Fox; and other numerous cousins, aunties, uncles, grandpas, grandmas from his Fox, Dixon/Smallboy, Poucette families of The Stoney Nakoda Nation. Phoenix was also loved by the McKeigan and Sansregrett family of Langdon, Alberta.

Phoenix was predeceased by his little brother Bryson Fox (2009), late Grandpa Darren Dixon Sr. (2008), and his great-grandmothers, Jessie Fox (1998) Ramona Dixon (2018); and other family members that have passed before him.

Share Your Memory of
Phoenix
Upload Your Memory View All Memories
Be the first to upload a memory!
Share A Memory
Send Flowers