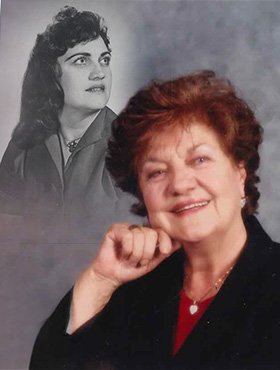 Irene Chiarastella, beloved wife of the late Lorenzo Chiarastella, of Calgary, AB, passed away on Saturday, January 9, 2021 at the age of 92 years.

In 1953, Irene immigrated to Canada from Italy with their daughter, Anna, to reunite with her husband in Banff, AB. She worked in food services most of her life until she retired and became a full time homemaker. Irene enjoyed cooking and preparing Sunday dinners for the entire family. Irene was a vibrant, social, and endearing woman.“Mayland Heights will never be the same without Irene”, according to her close friends.

Irene is survived by her daughter and son-in-law, Anna and Gabriel Iervella; her son and daughter-in-law, Raymond and Sandra Chiarastella; seven grandchildren, Lorenzo, Olivia, Lyza, Sonia, Lori, David and Cristina; and ten great-grandchildren. Irene was predeceased by her husband Lorenzo in 2004.

A private Funeral Mass will be held at Mary, Mother of the Redeemer Parish. Graveside Service will be at Queen’s Park Mausoleum Condolences, memories and photos may be shared and viewed on Irene’s obituary at www.McInnisandHolloway.com.

Share Your Memory of
Irene
Upload Your Memory View All Memories
Be the first to upload a memory!
Share A Memory
Send Flowers