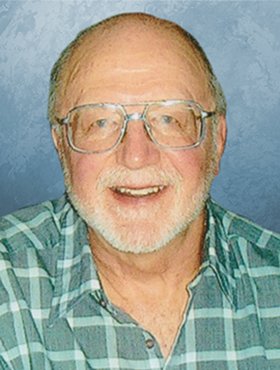 WOODROW, Major (the Reverend) Brian Ernest died peacefully in the early hours on Saturday, January 9, 2021 at Cambridge Manor in Calgary, AB, at the age of 86.  He is survived by his step-children, Linda Schmidt (Wilf), MaryAnn Schmidt (Peter), Joan Tarnes (Merv), Don Schmidt, Kevin Schmidt (Gloria), Ken Schmidt and Carol Schmidt (Garland); thirteen grandchildren and twelve great-grandchildren.  Brian was predeceased by his wife Evelyn Mary on June 23, 2015, both his parents, and his only sibling Captain Frederick Garth Woodrow.

Brian was born in Moose Jaw, SK on June 18, 1934 and attended King George V Elementary School and Central Collegiate Institute.  He was active in musical circles and played in municipal and military bands. At the age of 16, lying about his age, he enlisted in the reserve army.  At this time he also played the carillon of bells at St. John the Baptist Anglican Church, often in concert with the Salvation Army band. After high school Brian worked with Saskatchewan Government Telephones, as a traffic engineering apprentice in Moose Jaw, Regina, and Saskatoon, eventually being promoted to Traffic Facilities Senior Assistant at Saskatoon. During this time he continued his service with the reserve force and was commissioned in the Royal Canadian Corps of Signals. On occasion he was called out to the regular forces on special duty and commanded the reserve signals unit in Saskatoon.

During his early years, Brian had been active in the Anglican Church, and in 1964 he decided to resign from SGT and the reserve force and study for the ordained ministry. He enrolled at the University of Saskatchewan and received a B.A., then proceeded to Toronto and earned a Bachelor of Sacred Theology from Trinity College, University of Toronto. As he wished to become a hospital chaplain, he also took special training at Massachusetts General Hospital, Boston.  In 1970 Brian was ordained a priest and sent to minister to three indigenous reserves at Punnichy, SK. For pastoral reasons he was sent on to Kindersley, SK in 1971. It was then he met and married the love of his life, Evelyn Mary Schmidt (nee Hawkins). At the wedding the presiding priest declared “This is a splendid example of the efficacy of the Holy Spirit. Here we have a man who is a husband and father of seven in one moment!” Shortly after their wedding, Brian, Evelyn, and their four youngest children moved to Claresholm, AB where Brian became the assistant priest in the local Anglican church.  In 1974 the family moved again to Grenfell, SK where Brian was appointed Regional Dean.  In 1976 his wish came true and his bishop permitted Brian to complete his qualifications to become a hospital chaplain. Subsequently, he went on to the University of Virginia Medical Center and in 1977 returned to Canada and received his diploma as Specialist in Institutional Ministry. At this time, Brian, Evelyn and their youngest daughter relocated to Regina, where he began his position as hospital chaplain at the Plains Hospital. In 1980 Brian, Evelyn and Carol moved from Regina to Saskatoon where he became Hospital Chaplain for the Diocese of Saskatoon.  Brian, a true lifelong learner, continued his studies for a Master of Sacred Theology degree which he had begun in Virginia. He completed this degree in 1985. During these busy years, Brian remained active with the military. In 1973 he broke the reserve hiatus of fourteen years and re-enlisted as a chaplain with the rank of Major. For the next ten years he was called out at times for special duty with the regular force and otherwise ministered to the various units of the Militia Districts to which he was attached.

In 1985 Brian applied for and received the position of Director of Pastoral Care at Alberta Children’s Hospital in Calgary, AB. For the next nine years Brian enjoyed and relished his experience at ACH until the Alberta Government cancelled pastoral care in a ‘soft service’ staff reduction. Brian took a break of one year after his dismissal and then took advantage of his military experience and joined the Corps of Commissionaires at CFB Calgary, where he was posted to the Military Police as non-commissioned officer in charge of the Identification Section with the rank of sergeant.  After several years in this position, fate took another shot and CFB Calgary closed.  Brian felt he had had enough and decided to retire. Evelyn agreed and in 2010 they decided to return to Kindersley which was Evelyn’s home district. After Evelyn passed in 2015, Brian continued living in Kindersley until 2018, when health issues deemed it necessary for him to move into an assisted living facility. At this time he wished to return to Calgary, and he enjoyed life at the Chartwell Colonel Belcher until the summer of 2020 when his health took another turn and he required more care. The next few months involved extended hospital stays and relocation to different facilities, during the challenging and difficult Coronavirus pandemic. Brian remained kind, loving, and very appreciative of all who cared for him. Evelyn and Brian had 43 years of happy marriage and, despite many moves and many houses, a successful union.  Evelyn often said “It’s a good thing we never had children.” It had something to do with noses.  They enjoyed travel together, and included Canada, USA, United Kingdom, Europe, and Bermuda in the areas they visited.

During his years as a chaplain and later in life, Brian never forgot his heritage as a parish priest, and he served as an honourary assistant priest in many churches until his 70’s. Throughout the years, Brian found his many roles as priest, chaplain, husband, father, grandfather and great-grandfather, challenging and fulfilling in a life well-lived.

A Private Funeral Service will be held on Friday, January 15, 2021 at 2:00 p.m. For those unable to attend the funeral service will be livestreamed and can be viewed at https://vimeo.com/event/606832, or through her obituary at www.McInnisandHolloway.com. In lieu of flowers,   memorial tributes may be made directly to the Calgary Inter-Faith Food Bank Society, 5000 – 11 Street S.E., Calgary, AB T2H 2Y5, Telephone: (403) 253-2059, www.calgaryfoodbank.com, or The Calgary Humane Society, 4455 – 110th Avenue S.E., Calgary, AB  T2C 2T7, Telephone: (403)205-4455, www.calgaryhumane.ca. Condolences, memories and photos may be shared and viewed on Brian’s obituary at www.McInnisandHolloway.com.

on-location livestream due to an unpredictable internet connection.

The full recording will be available to view or download 2 hours after the service ends.

We thank you for your patience.

Share Your Memory of
Reverend Major Brian
Upload Your Memory View All Memories
Be the first to upload a memory!