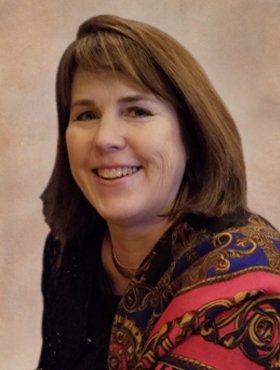 Tracy Ferstl beloved wife of Mike Ferstl of Calgary, AB, passed away on Saturday, January 9, 2021 at the age of 57 years.

Tracy Laura Halliday was born in Winnipeg, MB on September 16, 1963 to Donald and Vivian Halliday. Born the youngest of three children, Tracy was well traveled with the family moving from Winnipeg, Montreal and finally Toronto. Tracy attended Northern Secondary and Ryerson College.

As a young lady, Tracy participated in many outdoor activities.  A Junior Club member at the Royal Canadian Yacht Club in Toronto led to an active role as crew on eight metre racing yachts during summers. In the winter, she enjoyed recreational downhill skiing in Collingwood, Ontario and eventually introduced young children to skiing at the Craigleith Ski Club.

Tracy’s love for traveling and exploring new countries was highlighted in 1985 as she visited and enjoyed over thirty European countries.

Later in life, her continued curiosity to experience new culture and daily life abroad motivated her travel throughout married life.

Tracy wed Michael in a beautiful ceremony in 1990 on the Toronto Island surrounded by family and friends.  Living in Oakville for several years while working as a Tax Analyst in the Toronto Deloitte and Touche office, weekends were divided between racing on Lake Ontario and drag racing with her husband.  A job relocation for Michael eventually moved the couple cross country to Calgary, Alberta in 1997.

Life in Alberta was highlighted by the addition of German Shepherds, Amber and Delta, annual winter trips to Puerta Vallarta, Mexico and the Caribbean, visits to numerous dragstrips in the North West and many excursions to the Rocky Mountains. Tracy’s role as Recruitment and Talent Acquisition coordinator in Human Resources at the Canadian Mental Health Association in Calgary, gave her a great deal of satisfaction and purpose.

Tracy was predeceased by her father, Donald Halliday and Nana, Helen Hornoi-Jones.

The family would like to thank Dr. John Kelly, Neurosurgeon, assistant Chelsea Demler and the wonderful Neurology staff at the Foothills Hospital, Dr. C. Lim, Radiation Oncologist and Dr. Gloria Roldan-Urgoti, Chemotherapy Oncologist and their staff at the Tom Baker Cancer Center, the wonderful counselors at Wellsprings, Calgary South location and the amazing care of the staff at Foothills Country Hospice in Okotoks, AB. In addition, the family would like to recognize neighbor and good friend, Natalie Bray who assisted Tracy with visits to the Tom Baker Cancer Center.

In Lieu of flowers, memorial tributes may be made directly to the Brain Tumor Foundation of Canada by visiting their website https://www.braintumour.ca

Due to COVID-19 restrictions, a Celebration of Tracy’s Life will be held later in the year.

Condolences, memories and photos may be shared and viewed on Tracy’s obituary at www.McInnisandHolloway.com.

Share Your Memory of
Tracy
Upload Your Memory View All Memories
Be the first to upload a memory!