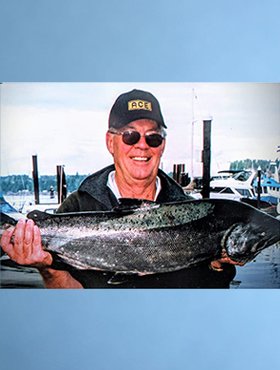 It is with much love and deep sadness that after a short, courageous battle with cancer, we announce the passing of our husband, father, and grandfather, Robert (Bob) Keith on Monday, January 11, 2021 at the age of 82 years with his family by his side.

Bob was born October 29, 1938, in Calgary. Bob grew up in Turner Valley until the age of fourteen years, when his family moved to Coleville, SK. He lived there for two years and then returned to Calgary where he finished school. Bob went on, at the age of eighteen, to join the Navy and serve his country for five and a half years. Bob then married the love of his life, Doreen, in 1964, and moved to Calgary where they raised their family.

Bob was a talented carpenter and contractor having spent forty years in the construction industry, the majority as the owner of Royal-Lite Builders. Bob was known for his mischievous sense of humour; he was a storyteller and one never knew when he was telling the truth!  At a moment’s notice, he was always game to head into his garage to bring to life any crazy idea that his family suggested. Bob loved to fish, spend summers in their RV, and winters down South in California and Arizona.  Above everything else, Bob cherished his close-knit family.

At Bob’s request, no funeral service will be held, and instead, there will be a celebration of life at a later date. Condolences, memories and photos may be shared and viewed on Bob’s obituary at www.McInnisandHolloway.com. If friends and family so desire, memorial tributes may be made directly to the Foothills Lion’s Club, https://foothillslionsclub.ca/.

The family wishes to thank the members of the Calgary EMS and CFD, as well as the palliative home-care team and the palliative team at RGH, for the excellent care given to Bob.