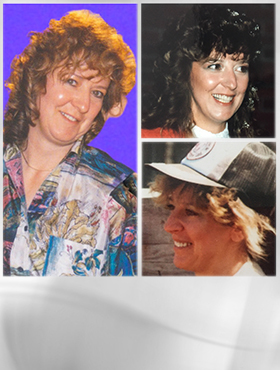 It is with much love and deep sadness that we announce the passing of our sister, aunt and cousin Edna Van Dusen, beloved wife of the late Allan Van Dusen (2008) on Friday, January 15, 2021, in Calgary, Alberta, at the age of 66 years.

Edna was born in the midst of a winter blizzard, on the family farm at Tide Lake, Alberta. She enjoyed the outdoors, nature, sunshine, travel and reading. Edna never backed down from a challenge of choice, whether it be a baseball, horseback riding or riding her motorcycle. She had a warm and caring personality, loved her family and close friends.

Edna always had a passion for law; and after completing her studies at Lethbridge Community College, she was employed at law firms in
Brooks and Claresholm. She then turned her focus to the RCMP in Calgary, where she devoted thirty plus years as a Civilian Member.

She is survived by her sisters, LaVina, Connie (Dale); brothers, Dave (Colleen), Michael, and Lawrence (Tannya); her dear niece and friend Michelle (Henry), and special aunts, nieces and nephews. Edna was predeceased by her parents Mike and Iva Kozy (2004 and 2009), and her brother Kenneth (1984).

A Celebration of Life will be held on Saturday, May 1, 2021 at a location to be determined. Condolences, memories and photos may be shared and viewed on Edna’s obituary at www.McInnisandHolloway.com.

The family extends their sincere gratitude to Dr. Meredith Borman and her team, plus all the professionals on Unit #42 of the Foothills Medical Centre that cared for her.