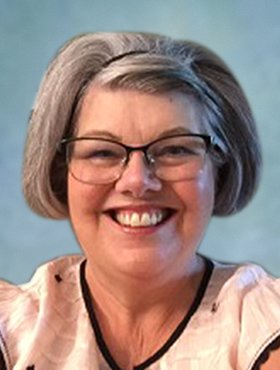 Surrounded by family, Julie Keyser, beloved wife of Marvin Keyser, of Calgary, AB, passed away on Friday January 15, 2021 at the age of 69.

Julie was the second born, of six, in London, Ontario, Canada on May 20, 1951.  The family loaded up and headed west in 1958, settling in Montgomery, Calgary, Alberta.

Julie found success working as a waitress at the Bowness Hotel, as a guidance secretary at Bowness High School, and as a secretary in Psychiatry at the Foothills Hospital. She also had a career as a Realtor, but fully realized her greatest role as a loving mother and grandmother.  Though it would be remiss to not fully acknowledge her crowning achievement as the 1989 Foothills Hospital Stampede Queen for her rendition of Patsy Cline’s hit song, ‘Crazy’.  Julie loved singing and was quite accomplished finding herself as a member of Region 26 Sweet Adelines, in Calgary.  Her love of the arts shone brightly, with her greatest passion revolving around music.  It was a language Julie “spoke” fluently and appreciated with her whole heart.

Julie loved to shop at secondhand stores and was a very compassionate person.  Anytime she knew someone was in need, she did her best to provide what they needed, whether it be dishes, clothing, food or even rides to appointments. Anyone who knew Julie, knew her love/hate relationship with Marketplace.  If there was a pickup in your neighborhood and she could not make it there fast enough you would get a call, “Can you, please pick something up for me from Marketplace?”  When she was in the hospital, she even ordered a fruitcake she was hoping to enjoy at some point.

Julie travelled the world and touched the lives and hearts of everyone she met on her adventures, picking up new ‘family members’ along the way, though she always loved finding her way back home to her closest friends and loving family.

A Memorial Service will be held for 20 attendees, on Saturday, January 30, 2021 at 2:00 p.m. All others are invited to join Mrs. Keyser’s service streamed live at https://mhfh.com/tribute/details/32429/Margaret-KEYSER-nee-Kennedy-formerly-Whitford-Northcott/obituary.html#tribute-start on the day of the service. Condolences, memories, and photos can also be shared and viewed here.

If friends so desire, in lieu of flowers or gifts, Julie has asked that memorial tributes be made directly to The Alzheimer Society of Calgary, 800, 7015 Macleod Trail S.W., Calgary, AB  T2H 2K6, Telephone: (403)290-0110, https://www.alzheimercalgary.ca/get-involved/donate-now.