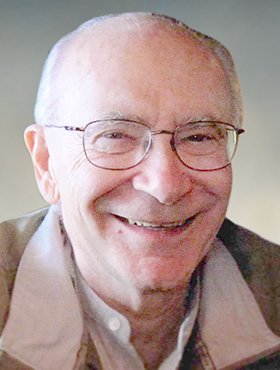 On the morning of Thursday, January 21, Murray Bogorus, of Foothills, AB, peacefully passed in his sleep, in the loving arms of his wife and best friend, Jacklyne, at the age of 85.

Murray, the eldest of three, was born on June 6, 1935 in Prince Albert, SK, to Sam and Rosella Bogorus, and after several moves as a family, finally settled in Edmonton, AB. Prior to attending medical school at the University of Alberta, Murray worked eleven years for CN as a fireman on the steam engines. He continued to work as a fireman until he graduated from the University of Alberta in 1965. It was during this time, as a medical student, that he and Jacklyne met and started their loving friendship, and then married in Edmonton on May 22, 1965. After interning for one year at the Royal Alexandra Hospital in Edmonton, they moved to Seattle, Washington where he completed a five year pathology residency at University of Washington. In 1971, Murray and Jacklyne moved to Calgary, AB, where he joined Calgary Medical Labs to practice pathology. From 1989 onward Murray continued to work as a pathologist in Calgary until he retired from Calgary Lab Services in 2008 at the age of 73. For over fifty years Murray and Jacklyne made many cherished memories together and with family, in the East Kootenays enjoying all its beauty and bounty while at their cabin on Rosen Lake, motor biking, fishing, hiking, and berry picking. Murray had a passion for fly fishing and could be found, using the flies he tied, west of Fernie on the Elk River in his hip waders, or a few times floating the Bow River past Policeman’s Flats. He particularly enjoyed saltwater fly fishing the Bahamian Islands, Belize, and Christmas Island in the South Pacific. Murray was also fond of building, tinkering with, and flying his remote controlled model airplanes.

Besides his loving wife Jacklyne, Murray is survived by his youngest sister Pat (Rex) Lowes of Quadra Island, BC, and numerous nephews and nieces. He was predeceased by his mother Rosella (nee Lazarowich), his father Sam, and his sister Alice Jomha.

Condolences, memories and photos may be shared and viewed on Murray’s obituary at www.McInnisandHolloway.com. If friends so desire, memorial tributes may be made to the charity of your choice.

If friends so desire, memorial tributes may be made to the charity of your choice.

Share Your Memory of
Murray
Upload Your Memory View All Memories
Be the first to upload a memory!
Share A Memory
Send Flowers