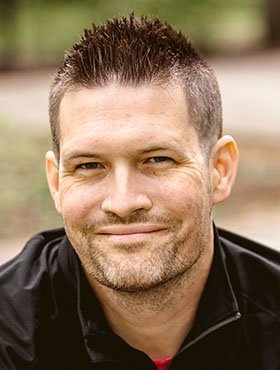 It is with heavy hearts that we say goodbye for now to our beloved son, grandson, husband, father, and friend, Jordan Karst. After a brief but valiant battle with cancer, Jordan passed away on Tuesday, January 26, 2021, with his family by his side.

Jordan was born in Edmonton, AB, on April 28, 1982, to Richard Karst and Sharon Lensen. He was the younger of two sons, with older brother, Benjamin. He had an adventurous spirit and accomplished much throughout his life. He was intelligent, passionate, hard working and excelled at his job as a project/operations manager. His witty, sometimes irreverent, outgoing and generous nature made it easy for him to befriend anyone. He was never one to shy away from being the center of attention or participate in a good debate.

Jordan always lent a willing hand whenever a neighbor needed help or a friend a favor. He had a strong devotion to his family and friends, and was a proud dad, a loving husband and son.

Jordan had a number of hobbies and interests, most notably his fervent passion for competitive shooting. He made a huge contribution to the shooting community by bringing 3-Gun to Calgary and District Target Association, as well as serving as a board member of the club. Jordan had a passion for introducing new shooters to events, such as Steel Challenge and 3-Gun. He was always the first person to approach someone observing an event to make sure they felt welcome, frequently inviting them to try it out using his own guns. He would assist new shooters with their technique and be the first to congratulate them if they managed to best his impressive times.

Jordan loved nothing more than solving a problem. If he wasn’t out shooting, you could often find him in his basement tinkering around with electronics and machines. He was extremely detail-oriented and spent many hours scrutinizing over the particulars of project plans.

Jordan also had a keen eye for photography. He had a knack for ensuring that all elements within the photo worked together harmoniously to convey his vision. His skilled photography coupled with his love of stargazing resulted in many spontaneous drives out of city limits in attempt to capture the perfect photograph.

Jordan’s friends will also remember him as widely revered for his expertise in first person shooter video games. He was often referred to, “as being in a league of his own”, and likely could have become a pro gamer if he ever wanted to make a career change.

Jordan will be deeply missed and lovingly remembered by his wife, Anita Karst, and daughter Kenzie Karst. He is also survived by his father, Richard Karst (Ekaterina and son Vadik), mother, Sharon Lensen (George); brother Benjamin Karst, and his family (wife Arielle and daughter Adalyn); sister-in-law, Sandy Rosvold (Jeremy and their children Emily, Alex and Katie), his grandmother Florence Karst; as well as numerous cousins, aunts, uncles, and friends.

Jordan, you may have lost your battle to cancer but never became its victim. You had two options: give up or fight like hell. And fight like hell, you did! Cancer did not conquer your spirit, shatter your hope, or invade your soul. You always found the strength to persevere and endure in-spite of overwhelming obstacles. You are not what has happened to you…you are our hero. “In life we loved you dearly, in death we love you still”

Those wishing to pay their respects may do so at McINNIS & HOLLOWAY (Deerfoot South, 12281 – 40th Street SE, Calgary, AB) on Thursday, February 04, 2021 from 6:00 to 9:00 p.m. Due to Covid restrictions, a Funeral Service will be held for a very limited number of attendees, on Friday, February 5, 2021, at 2:00pm. Family and friends are invited to join Jordan’s service streamed live on the day of the service. For those who are unable to view live, a recording of the service will be posted. Condolences, memories and photos can also be shared and viewed here.

The family would like to extend their heartfelt gratitude to the team at Tom Baker Cancer Centre (Dr. Khan/Dr.Henning), the nurses and doctors at Foothills Medical Centre (Unit 46/Dr.Kelly) and South Health Campus, as well as, the Palliative Home Care Team (Tobi Stearn) for their excellent care and compassion for Jordan and his family.

Share Your Memory of
Jordan
Upload Your Memory View All Memories
Be the first to upload a memory!