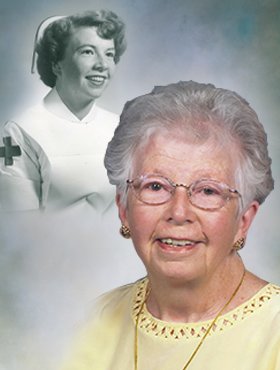 Shirley Cooke UEL, BNSc, of Calgary, AB, passed away, after a long life well-lived, on Wednesday, February 3, 2021, at the age of 91years.

Shirley was born in Kingston, ON, on August 15, 1929. Her father passed away when she was just an infant. Shirley was raised in a house full of Queen’s University students taken in as borders by her mother. They kept a close eye on Shirley and acted as an extended family. Shirley graduated from Queens University in Kingston with a degree in Nursing Science in 1953. In 1955, Shirley married Charles (Ted) Cooke. They moved to Calgary in 1955 on a honeymoon trip, planning to stay for one year. They both fell in love with Alberta and lived either in Edmonton or Calgary throughout their married lives. Ted and Shirley’s first born son Bruce had many health challenges and despite many obstacles Shirley raised him so he was able to meet his full potential.

Shirley very much enjoyed her volunteer role with the Calgary 1988 Olympics and spoke of it for many years after. She was particularly proud of her nursing career. Her first job in Calgary was with the Victorian Order of Nurses. She also taught first aid with St. Johns ambulance, and had many roles working with seniors. Shirley loved the outdoors, especially camping with the family, first in a tent trailer then a holiday trailer.  When her children were young they spent summers trailer camping at Mara Lake, BC. She also loved following Ted to Calgary pointing club field trials where they trialed Brittany Spaniels, many that they had bred themselves. In her retirement she traveled to many places around the world but her favourite summer vacations were spent with Leanne, Colin and her grandchildren at Marie Lake, AB. She will be most remembered for her kind and gentle nature and being quick to laugh.

Shirley is survived by her daughter and son-in-law, Leanne and Colin of Calgary, AB; son and daughter-in-law David and Heidi of Chilliwack BC; three grandchildren, Kara of Whitehorse, YT, Michael of Montreal, QC and Andrea of Calgary, AB; and newborn great-granddaughter, Dulcina Lacroix of Whitehorse, YT. Shirley is also survived by numerous nieces, nephews and friends.

Condolences, memories and photos may be shared and viewed on Shirley’s obituary at www.McInnisandHolloway.com. If friends so desire, memorial tributes may be made directly to The Alzheimer Society of Alberta and the Northwest Territories, Administrative Office, 10531 Kingsway Avenue, Edmonton AB T5H 4K1.  Tel: (1-866) 950-5465, www.alzheimer.ab.ca.