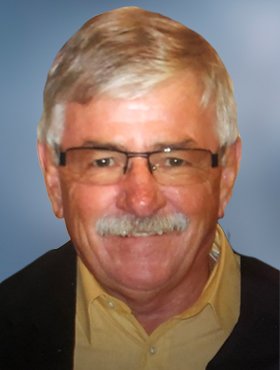 It is with deep sadness we announce the passing of Ronald William Johnson on Monday, February 1, 2021 in Calgary, AB at the age of 71 years.

Ron was born in Hanna, AB on April 12, 1949 to Charles and Frances Johnson.  Ron, born a twin with Russell, grew up in Hanna, AB and graduated from Hanna High School.  Ron was an exceptional athlete for the Hanna Hawks basketball and gymnastics teams. He played baseball for the Hanna Youth League and was an outstanding goaltender for the Hanna Ambassadors.  He continued his love for athletics in later years by playing baseball in Jasper for the senior men's league and hockey for the Atha B Blues.

In 1969, Ron’s daughter, Shelley Lynn was born.  It was at this time Ron was working as a surveyor for Catalina Exploration and Development.  His second daughter Robyn Joy was born in 1973 and it was also at this time that he began his career with the Canadian National Railway as a brakeman; leading to a very long and successful career as an engineer.  Throughout the 1980’s and 1990’s Ron’s position with CN Rail took him to many locations in Western Canada: Edmonton, Terrace, Smithers, Jasper, Kamloops and eventually Calgary.  After his retirement in 2004 Ron consulted for the Union Pacific in various locations across the US and also for the Canadian Pacific Railway.

Ron loved Mexico and travelled there for many years to deep sea fish, golf and spend time with new friends he had made on his vacations.  After retirement he settled in Mazatlan enjoying the warm weather, outdoor sports, working on his Spanish and hosting family and friends who came to visit.  He moved back to Canada in 2020.

We all enjoyed his quick wit and sense of humour. Ron was a kind, generous man and many people benefitted from his generosity. He was a wonderful host and there were many Thanksgiving celebrations hosted by Ron. I remember him always attempting to perfect his turkey and once he followed a Martha Stewart turkey recipe involving cheesecloth and white wine in a spray bottle.  It was delicious. Ron’s greatest joy though, was his daughters, Shelley and Robyn and his grandchildren. Ron and the girls shared many adventures skiing, skating, attending Oilers and Team Canada hockey games, exploring Disneyland, Mexico and Hawaii. Summers, Christmas vacations and Spring Breaks in Jasper were very memorable times for Ron and the girls.  The grandchildren cherish their very fond memories of visiting Grampa in Mazatlan.

He is survived by his daughter Robyn Johnson, grandchildren, Tess, William, Mary, Augustus and Georgia; his siblings, Lyle (Donna) Johnson, Russell (Joan) Johnson, Carol (John) Johnson and Garry (Patty) Johnson; and sister in law Pam Petrin, as well as numerous nieces, nephews and cousins. Ron was predeceased by his parents Charles and Frances, his brother Douglas and his daughter Shelley.

A Celebration of Ron’s Life will be held at a later date. Condolences, memories and photos may be shared and viewed on Ron’s obituary at www.McInnisandHolloway.com. If friends so desire, memorial tributes may be made directly to KidSport Canada - Alberta, Box 36107, Lakeview RPO, Calgary, AB T3E 7C6 Telephone: 1-(888) 91-4kids or (403) 217-3761, www.kidsportcanada.ca.