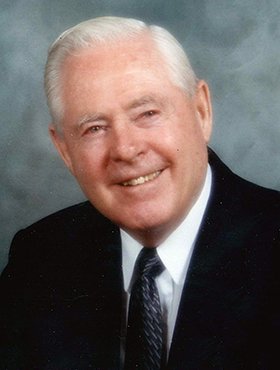 Edward (Norm) Spice of Calgary, AB passed away peacefully on Thursday, February 18, 2021 after a long and accomplished life.

Norm was born in Yorkton, SK on October 28, 1927 where he was the youngest of four children, raised alongside his brother Jim, and sisters, Jean and Peggy.  He was active in sports, especially hockey and football, which carried on into his years at the University of Saskatchewan where he earned a degree in Mechanical Engineering in 1950.  Norm’s picture is on the UofS Athletic Wall of Fame.

In 1951, Norm met Dulcie, the love of his life, at the wedding of their best friends, Art and Vivianne Meyer.  Norm and Dulcie were married in 1952 and went on to raise their children in Saskatoon, Edmonton, and Calgary.  Their lives of love and devotion to each other and their family left a legacy for us all.  Norm modelled honesty and integrity to everyone who knew him.

After graduating from UofS, Norm went on to a successful career as an engineer, working initially for International Harvester in Saskatoon and later moving to Edmonton where he worked for Oilwell Division of USSteel for twenty-five years.  Later in his career he worked for several oilfield companies including Dreco, Hill Peck, and Bow Valley Industries, and as an Engineering Consultant.  He completed his career as the Alberta Director of the China-Alberta Petroleum Center in Beijing, China.  Norm’s career was filled with new adventures and challenges and he was widely respected as an engineer and manager.

Norm’s children lovingly remember road trips to BC, camping throughout western Canada, hunting and fishing trips in the prairies and foothills, ski trips to the mountains and Norm’s famous pancake breakfasts.

Norm and Dulcie retired to Nanoose Bay on Vancouver Island in 1993.  They later moved to Craig Bay near Parksville and returned to Calgary in 2018.

A gathering will be held at a later date.  Condolences, memories and photos may be shared and viewed on Norm’s obituary at www.mcinnisandholloway.com.

In loving memory of Norm Spice, a tree will be planted in the Ann & Sandy Cross Conservation Area by McInnis & Holloway Funeral Homes.