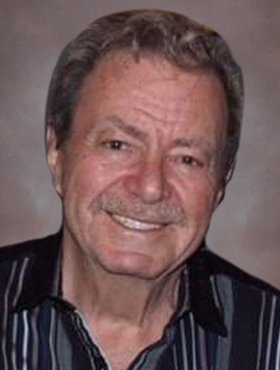 Merv Smith, beloved husband of Myrna Smith (nee Chambers) of Calgary Alberta passed away on Friday, February 19, 2021 at the age of 81 years.

Merv grew up and went to school in Tompkins, SK. In 1958 he married Joyce Frederick from Shaunavon, SK. Their first child, Brent, was born in Maple Creek, SK. Shortly thereafter, they moved to Calgary, AB to start his career and continue to raise his family.

Merv joined the Bowness Fire Department and was the first fireman to be hired when Bowness was annexed becoming part of the City of Calgary. In 1964 he was appointed Chief of the Fire Department. Both Merv and his wife Joyce, were actively involved in the department.

Merv was born into a musical family, his father Harold played instruments and sang. As the sixties evolved into the seventies, Merv and his brother Lloyd became a staple of the Calgary music scene. They formed the Duo called “The Smith Brothers” performing at venues, such as, The Trade Winds Motor Hotel where they were recognized for being the longest running entertainers at one nightclub (over seven years).  When the Trade Winds closed, he continued to entertain at the Starlight Restaurant in Calgary.

During that time, they also launched their recording career, initially as “Merv & Lloyd Smith & The Polka Dots”, releasing several singles on the Melbourne Record Label in 1967-68, including “All that’s Left of Me”. He started to record his first Album in 1969 - (My Kind of Country). He continued building his musical career recording 3 more Albums in Nashville in the 1970’s.

Merv was always an entrepreneur. He owned and operated three record stores in Calgary, “Smith Sound” as well as a Chicken Venue “Chicken Flings and Taters”. His last endeavour was opening a business franchise with Edo of Japan in Phoenix, AZ.

In his early fifties he became a stockbroker at Yorkton Securities where he created many connections. His colleagues thought of him as a genuine and all-round great guy, enjoying many golfing getaways with him.

Merv met his wife Myrna in 1990 and they spent the last thirty years together. During this time, they enjoyed travelling, golfing, relaxing days at Mable Lake and get togethers with his family in Langdon.

Winters were spent at their second home in Phoenix, AZ. Here is where they celebrated Christmas and Thanksgiving each year also creating many amazing memories with three of his stepdaughters and family.

Merv was a kind, loving and generous man. He was funny with a quick-witted sense of humour. He had a zest for life and loved bringing us together to fuel our souls with his gourmet Prime Rib dinners, Mervyn Burgers and famous Cinnamon Buns. He touched so many hearts with his love, laughter and song. There is no way to capture everything we will remember about Merv and his influence on his family, but we will always know how he made us feel: valued, important and loved.

Over the past two years Merv lived with the early stages of Dementia. Due to sudden illness, he was hospitalized. Later he developed pneumonia and passed peacefully in his sleep.

Besides his loving wife Myrna, Merv is survived by his four children, Brent Smith (Gae), Wendy Mikkelsen (Wayne), Belinda Pratt (Garry) and Mark Dean Smith; and four step-daughters, Sue Chambers (John) (Shane), Janice Chambers (Mike), Heather Tawney (Mark) and Colleen Leblanc. He was blessed with seventeen grandchildren, and twelve great-grandchildren whom he loved dearly. He is also survived by his brother Lloyd Smith, and sister Edie Haavind (nee Smith). He was a son, brother, husband, father, grandfather and great-grandfather and he loved every minute of it. Merv was predeceased by his parents and brothers, Wayne and Warren.

A Celebration of Merv’s Life will be held at a later date this summer. Condolences, memories and photos may be shared and viewed on Merv’s obituary at www.McInnisandHolloway.com.

Share Your Memory of
Mervyn
Upload Your Memory View All Memories
Be the first to upload a memory!
Share A Memory
Send Flowers