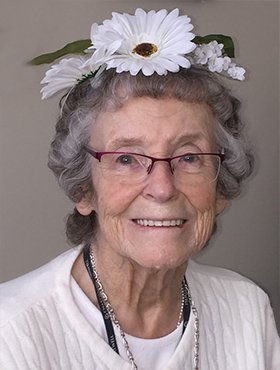 June Whittle, beloved and loving daughter, wife, mother, grandmother, passed peaceful on Saturday, February 20, 2021 in Calgary, AB at the age of 92. She was predeceased by her husband Thomas Desmond Whittle in January 2015 and her mother Ada Morgan (nee Pilkington) in April 1996. She will be sadly missed by her daughter Heather, son-in-law Andy, grandson Colton Gray along with many other relatives and friends here in Canada and in England.

June was born in Astley Bridge, Bolton, Manchester, England to Ada Morgan (nee Pilkington) and James Terrence Morgan on June 9, 1928. They lived with Ada’s sister (Eliza Jane) and husband (John (Jack) Ratcliffe) for several years as times were hard in the 1930’s. When June was three, her father went to London, England seeking work. Correspondence ended shortly there after and it is assumed he passed around that same time. At age sixteen, she met her husband to be, Thomas Desmond Whittle, at a birthday party at the local pub. She was quickly welcomed into the Whittle fold. At age seventeen, June was hit in the back and had to have a kidney removed. Desmond came to the hospital with flowers and the rest was history.

They were married March 17, 1951. Desmond’s younger brother, John Everist (dec. 2019) and his wife Monica (dec. 2020) immigrated to Canada in 1954 and shortly after, with a little encouragement, Desmond and June packed up and made a new home in Calgary, Alberta, Canada in 1957. The following year, June’s mom Ada joined them and, in 1964, their daughter Heather Diane was born.

When they first arrived in Canada, June worked for an insurance agency. After Heather was born, she stayed home to raising their daughter with help from Ada. Desmond decided to start his own radio communications business where, for several years, June worked at his secretary.

Throughout the years, they loved to travel back to England to visit relatives and enjoyed many trips around the world whether by plane or cruise ship.

In 1995, Desmond was admitted into long-term care as Dementia became a new reality. June moved next door into Chartwell Harbours Seniors Residence so she could be close to Desmond and could visit him on a daily basis. After he passed, she continued to live at the Harbours enjoying activities with new friends. She stayed there until June 2020 when Dementia became her new reality. She was admitted into long-term care at Bethany Calgary until she passed.

A heartfelt thank you to the staff and friends at Chartwell Harbours, and the support and understanding of the staff at Bethany Calgary.
A Celebration of June’s Life will be held at a later date. If friends so desire, memorial tributes in June’s name may be made directly to the Alzheimer Society of Calgary, 800, 7015 Macleod Trail S.W., Calgary, AB T2H 2K6, Telephone: (403)290-0110, www.alzheimercalgary.com or to another charity of their choice. Condolences, memories and photos may be shared and viewed on June’s obituary at www.McInnisandHolloway.com.