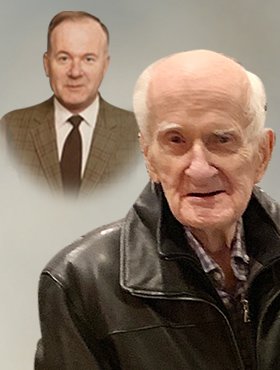 Douglas (Doug) Stanley Morgan, beloved husband of Matilda (Tillie) Morgan, of Calgary, AB, passed away on Thursday, March 4, 2021 at the age of 96 years.

Doug grew up in East Vancouver and completed all of his schooling while there. He graduated from the University of British Columbia with a Law Degree.

He met and married Tillie in 1952 on a blind date. After a whirlwind courtship, they were married on August 2, 1952. They quickly found themselves in Calgary, AB looking for work. Doug found a job and they were sent to Edmonton, AB. In 1956, he was transferred to Calgary, AB and has been here ever since.

He was a member of the BC and Alberta Law Society. He worked as a Corporate Lawyer with Seaboard, Texaco, and Norcen. At Norcen,  he was the head of the Legal Department. Doug was also a Director with Omega Hydrocarbons.

Doug enjoyed playing the stock market, reading newspapers and playing the horse races. He had a passion for travel, camping, spending time with family, hiking, and playing the piano. He thoroughly enjoyed numerous long weekend trips to Great Falls and Kalispell, Montana. After retiring, Doug and Tillie enjoyed many worldwide adventures.

Doug was predeceased by his parents, Mildred and Daniel Morgan; his brother Cecil Morgan, and his sisters, Dorothy Yates and Peggy Stevens, all of Vancouver and Surrey, BC.

A Celebration of Life will be held at McINNIS & HOLLOWAY (Crowfoot, 82 Crowfoot Circle NW, Calgary, AB), on Friday, September 17, 2021 at 2:00 p.m. Condolences, memories and photos may be shared and viewed on Doug’s obituary at www.McInnisandHolloway.com.

He will be most remembered for being part of our lives for so many years. Doug had a wonderful, fulfilling life.

The family would like to thank Homa Health Care Services (especially Zohreh, Jimy, Reji, Tiru, Yiftu and Ify) for the wonderful care of Doug over the last few months that enabled him to remain at home.

Donations would be gratefully accepted at the Calgary Zoo. You can do this online at https://websales.calgaryzoo.com/buy/donations/  or you can mail it in to: Calgary Zoo, Development Department, 1300 Zoo Rd NE, Calgary AB T2E7V6.

Share Your Memory of
Douglas (Doug)
Upload Your Memory View All Memories
Be the first to upload a memory!
Share A Memory
Send Flowers