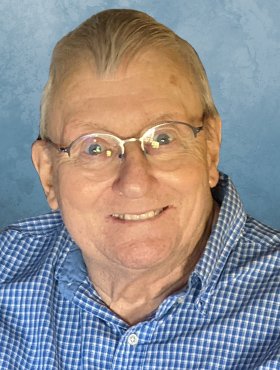 Peter Goodwin of Calgary, AB, passed away on Monday, March 22, 2021 at the age of 76 years after stubbornly fighting multiple sclerosis.

Peter was born in Liskeard, England on December 6, 1944. He grew up in Trewidland.  He graduated from Camborne School of Mines, and married the love of his life, Sylvia Pearce on July 30, 1966 (the day England won its only World Cup – must have been true love as Peter was an avid soccer (football) fan and missed most of that game). Peter and Sylvia then moved to Lynn Lake, MB to begin his mining career with Sherritt Gordon Mines.

Peter accomplished much throughout his life.  He climbed the ladder at Sherritt, to become Manager of Ruttan in 1980, and then after negotiating away his job, became President of LynnGold, finally obtaining his dream of gold mining in the North.  When MS hindered his ability to go underground, he turned his attention to other pursuits, including running the local insurance company, publishing a weekly newspaper, and then a “hotelier” in both Leaf Rapids and Creighton, SK.

He loved talking to people and learning about them, and people generally liked to be around him, although as his MS progressed, so did his stubbornness.  He often gave rides to those walking between Lynn Lake and Leaf Rapids, and was rewarded with friendships and the odd smoked muskrat buried in the snowbank on the side of the road.  He loved supporting local causes and artists, and his home is a gallery of native art bought from local artists who came to his office knowing his big-heartedness and love of the North.

Peter and Sylvia both embraced the lifestyle that living in Northern Manitoba offered. They made many lasting friendships and enjoyed camping, fishing, and boating on the many lakes and rivers. Their time at their cabins at Berge Lake was special to them as well as their daughters and their many friends that were welcomed to spend weekends at the Goodwin’s. In part spurred by his becoming a hotelier, he became an avid foodie, and could not imagine life without a good steak, and some fresh pickerel.

Peter reluctantly left Northern Manitoba in 2018 and moved to Calgary to be closer to his daughters and better medical care. In Calgary, he enjoyed watching Tamsyn curl, walking a portion of the Banff Legacy Trail with his daughters and grandchildren, experiencing his first Rodeo, Chuckwagon Races and a Corn Dog at the Calgary Stampede, attending a Blue Bombers vs Stampeders game, numerous outings to pubs and restaurants, as well as walks in his neighbourhood and along the pathways in Calgary. He also enjoyed the many friendships he made at his retirement residence. He insisted he didn’t socialize but knew most of the other residents by name.

Peter will be lovingly remembered by his daughters, Tamsyn McLean and her partner Blair Watson of Calgary, AB and Jacqueline Clark of Redmond, WA; his grandchildren, Jessica, Rachel and Sean Clark; and his sister Pamela Cocks of St. Austell, Cornwall, England, as well as many nieces, nephews, great-nieces and nephews, cousins and friends. He was predeceased by his wife Sylvia in 2003.

A Virtual Celebration of Peter’s Life will be held via Zoom on Sunday, May 2, 2021 at 12:00 p.m. (11:00 a.m. PDT, 12:00 p.m. MDT; 1:00 p.m. CDT; 2:00 p.m. EDT and 6:00 p.m. GMT). If friends and family would like to share a memory of Peter during the virtual celebration, please send an email to petergoodwin.celebration@yahoo.com to be added to the guest list. Condolences, memories and photos may also be shared and viewed on Peter's  obituary at www.McInnisandHolloway.com.