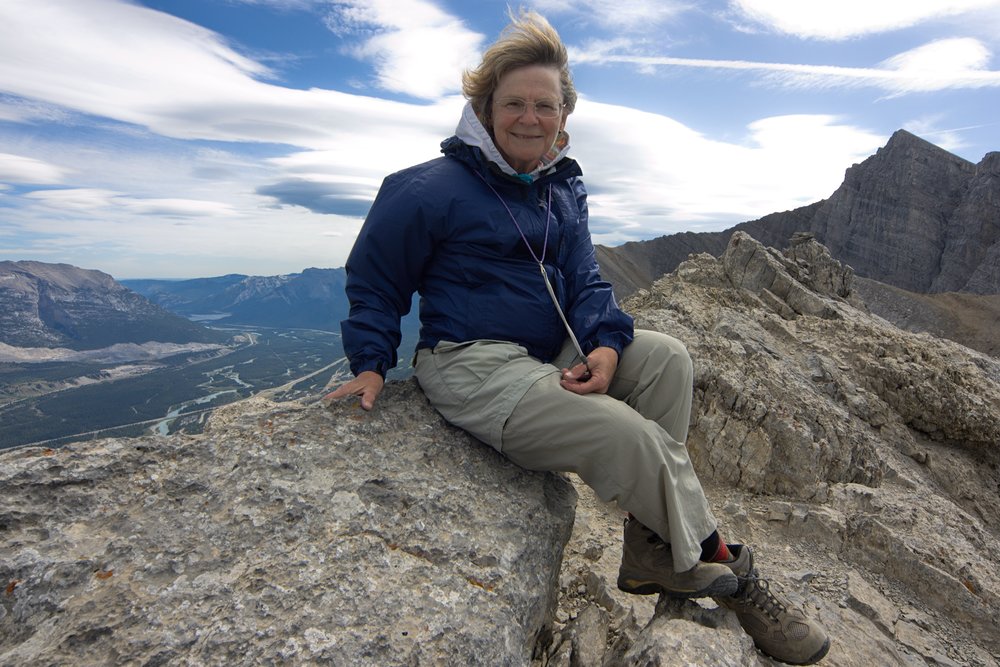 Moya Terese Christine Kavanagh, of Calgary, AB, passed away peacefully, surrounded by family, on Tuesday, April 27, 2021 at the age of 74 years.

Moya was born in Sydney, Australia on October 1, 1946, the first child of James Butler Mary Kavanagh and Veronica Frances Kavanagh (Gear). When the family returned to Canada, they initially settled in Westwold in the interior of B.C. The family then moved to the lower Mainland, living in Mission City, Surrey and New Westminster.

After graduation from St. Ann’s Academy, Moya attended the University of British Columbia where she studied microbiology. In 1968 Moya married David Jones. They subsequently moved to Toronto where Moya completed a Master’s degree in statistics. Moya was fond of her work in Toronto - relating stories of work she’d done on epidemiology with SickKids hospital and work for the Ministry of the Environment related to water quality.

In 1982, Moya and Rick Bardal began their life together. Moya and Rick married in December 1984. Rick’s career led to a number of moves for the family – to New Westminster; Halifax, Nova Scotia; and Edmonton, before finally settling in Calgary.

Throughout her time in New Westminster and Halifax, Moya was working on completing her PhD dissertation. While in Halifax she taught statistics at Dalhousie and Mt. Saint Vincent University.

After a brief time back in Edmonton, the family moved to Calgary where Moya began to get more involved with the Faculty of Education at the University of Calgary. In 1993 she gave a paper at Oxford University in England. She felt delighted and honored, and considered it a highlight of her academic career. She held a position teaching in the Faculty of Education at the University of Alberta. At the time of Rick’s death in 1996, Moya retired from teaching in an academic setting and began to pursue a range of interests and hobbies.

Moya worked for a time at Chapters which she described as a dream come true – she gleefully reported spending most of her salary in the store. She was an incredibly avid reader and had an amazing home library. Moya discovered a passion in archeology and comparative osteology – she volunteered on digs throughout Calgary and Southern Alberta as well as working on digs in Greece and Antigua.

Moya loved being in the mountains and felt a deep connection to mountainous places. She loved wild flowers and especially orchids – many a hike was spent wandering flower filled meadows delighting in identifying plants. She always seemed to have a special place in her heart for the tiny, plain and unnoticed varieties. Any of Moya’s hiking companions will clearly recall Moya exclaiming “look it’s a tassled bitterwort” or some such obscure name.

Moya’s passion for hiking and travel took her to many places – all over Western Canada, to the Haute Route, the Camino de Santiago, the Grand Canyon, California, Newfoundland, Belize, and Australia.

She also took up knitting in the way she pursued all of her passions, with devotion, or as one friend accurately described “with no half-measures”. She produced beautiful knitted items for anyone who asked. An untold number of babies were snuggled cozily in the beautiful sweaters and hats which emerged from Moya’s knitting needles.

Moya loved to spend time with her growing family. She was delighted to meet each of her grandchildren and loved to spend time with them exploring, baking and reading.  She will be missed by her sons Brian and Gord; her daughters (-in-law) Kelly and Aleta; her grandchildren Megan, Rachel, Charlotte, Gabrielle, Lachlan and Ben; her sisters Kathy (John) Schretlen and Liz (Gene) Demens; sister-in-law Judy (Richard) Mori, and by numerous extended family members and dear friends.

Moya appreciated a broad range of writing, including poetry. She often recited her remix of two poems by the American poet E.E. Cummings:

I thank you God for this most amazing day:

For the leaping greenly spirit of trees

And a blue true dream of sky;

And a disappearing poet of always, snow;

And a first dream called Ocean.

Condolences, memories and photos may be shared and viewed on Moya’s obituary at www.McInnisandHolloway.com.

Share Your Memory of
Moya
Upload Your Memory View All Memories
Be the first to upload a memory!
Share A Memory
Send Flowers