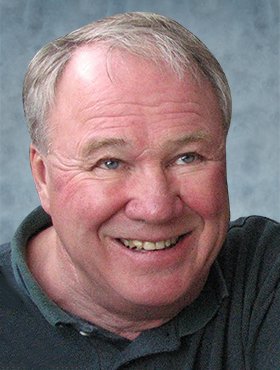 It is with great sadness that we announce the passing of Win Kirkwood, of Edmonton, Alberta on Thursday, April 29, 2021 at the age of 79 years.

Win was born in Edmonton on August 8, 1941.  He attended Bonnie Doon High School and later graduated from the Northern Alberta Institute of Technology.

He worked for Edmonton Telephones for almost his entire career and had the good fortune to establish countless lifelong friendships along the way.   Win worked in a number of roles over his career at “Ed Tel”, eventually settling into a sales role in the latter years.  Anyone who new him would know this was a role that suited Win and his magnetic personality perfectly.

Win was always proud of having constructed the family cabin at Baptiste Lake. The cabin was the center of his family’s world for over twenty years and provided anyone who stepped inside with warm and lasting memories.

The family treasured their time at the cabin with Win.  They spent countless hours snowmobiling, waterskiing followed by singing and telling jokes around the campfire. Win took great pride in hosting the annual corn roast, and loved nothing better than to get people together for a good time. In his later years Win loved cycling around Edmonton and exploring the city’s bike trails.  He also took great joy in time spent with his four grandkids, an audience that adored him beyond words.

Win also deeply loved his West Highland terrier Digby, his constant companion right up until Digby's passing a few years ago and the centre of Win's world.

Win’s final years have been spent at Luxstone Manor in Airdrie Alberta where he developed many close friendships with the staff and his neighbours.

He was a wonderful and loving father, grandfather and friend who will be most remembered for his warm smile and generous spirit.  He will be deeply missed by all who were lucky enough to have known him.

Win is also survived by his ex-wife Maureen Kirkwood, brother George and sister Sandra, as well as numerous nieces, nephews, cousins, and friends. Win was predeceased by his mother and father, Georgina and Harry Kirkwood.

Share Your Memory of
Hugh
Upload Your Memory View All Memories
Be the first to upload a memory!
Share A Memory
Send Flowers