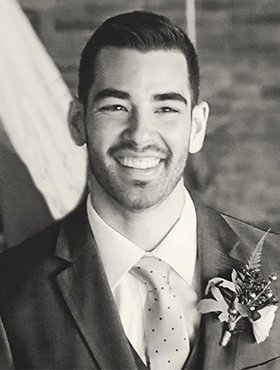 It is with profound sadness we announce the sudden passing of Patrick Ronald Tomiyama, on Tuesday, April 27, 2021 at the age of 32 years. Our lives have been changed forever by this unexpected tragedy; words cannot express our loss.

Patrick was born March 14th, 1989 in Saskatoon, SK. He attended Greystone Heights Elementary School and graduated from Evan Hardy Collegiate in 2007. He received his Journeyman Welding Certificate in 2011. While working as a welding apprentice he took upgrading classes and was accepted into the College of Engineering, graduating with a Degree in Mechanical Engineering from the University of Saskatchewan in 2015. He moved to Calgary, Alberta for his first job as an engineer with Kiewit. He also worked with Hallmark Tubulars Ltd, and TNT Engineering. Patrick recently started working as a Maintenance Engineer at Nutrien’s Redwater facility.

Patrick met Kaitlyn, the love of his life, in Saskatoon in the summer of 2014. By March 2015 he moved to Calgary for work and they continued their relationship long-distance until 2019 when Kaitlyn finished school and could join him in Calgary. After a 2 year engagement they managed to get married in a beautiful celebration in September 2020, despite the COVID restrictions. We will cherish the photos and memories from this day forever. Patrick and Kaitlyn were in the process of moving from Calgary to the Edmonton area where they planned to settle in to a gorgeous home, advance their careers, and start their family.

He made great friends wherever he went; rugby teams while in Saskatoon, fellow students in engineering, and his CrossFit community in Calgary. He both trained and coached at AI Performance; he was a positive influence at the gym through his positive attitude, encouragement of others, and hard work.

Patrick had a strong work ethic, was loyal and honest in everything he did. He was always willing to help others at a moment’s notice, all you had to do was ask. Through these unfortunate circumstances we were able to honour Patrick’s wishes in donating his organs to those who need it most.

We will miss his mischievous smile, little quirks, and all the things that might have been had his life not ended so soon.

Patrick will be missed everyday by his wife and best friend Kaitlyn, his parents Rob and Bonnie, brother Ryan (Esther), sister Alison (Mike), In-laws Duncan and Lori, sisters-in-law Carrie (Jason), Courtney (Alex), Erica (Scott) and Julie (Andrew); his Grandma Tomiyama; his many nephews and niece, aunts, uncles, cousins, friends, and his cats the Prince of Darkness (Quincy) and Poopy (Lanie). Patrick was a great friend and had many great friends.

Special thanks to all of the medical staff involved in Patrick’s care. The empathy and compassion they showed to the families was exemplary and appreciated. We thank everyone for their kind words and prayers.

A memorial service will be held at a later date. Condolences, memories and photos may be shared and viewed on Patrick’s obituary at www.McInnisandHolloway.com.

Share Your Memory of
Patrick
Upload Your Memory View All Memories
Be the first to upload a memory!
Share A Memory
Send Flowers