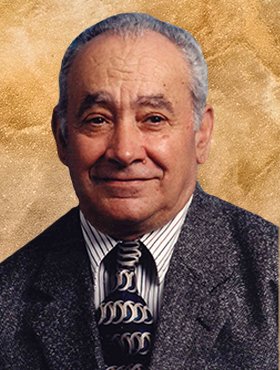 11:00 am
Mary, Mother of the Redeemer YouTube channel
Live Stream
Calgary, Alberta, Canada
A Private Funeral Service will be held on Tuesday, May 18, 2021. Tributes will begin at approximately 10:45 a.m., followed by the Service at 11:00 a.m. Family and friends are invited to join Franco’s service, streamed live at this link: https://www.youtube.com/watch?v=RE4qKIfoHio The link will also have a recording of the Service, following the live stream.

Francesco (Franco) Domenico Trotta, beloved husband of Carolina Concetta Trotta (nee Rizzuti) of Calgary, AB, passed away on Wednesday, May 12, 2021, at the age of 87 years, after three courageous battles with cancer.

Franco was born in Sartano, Cosenza, Italy on August 1, 1933. He worked on his family farm as a child and later served with the Italian army. Franco married Carolina in 1956 and immigrated to Calgary, AB, in 1957 with their infant daughter Maria. They had four more children, all born in Calgary, Antonio Giuseppe, Luigi, Pina, and Licia.

Franco worked as a skilled cement finisher and carpenter on many Calgary landmarks, including several downtown high-rises, the University of Calgary campus, and the Olympic Saddledome. He even touched up the cement lions on Calgary’s Centre Street Bridge. He would share his carpentry skills generously to help his family and friends with many renovation projects.

Franco did not let his childhood gardening skills go to waste. He built a heated greenhouse, bigger than a garage, in his backyard to complement his massive outdoor garden where he grew tomatoes, figs, peppers, grapes, and all kinds of vegetables. His garden was his escape where he would say, “I feel like I see God.” His favourite place to vacation was Hawaii, maybe because it felt like he was in his greenhouse.

In true Calabrese form, Franco made amazing sausage, salami, and prosciutto. He was also an avid sportsman and fisherman. His sons would say no bird was safe when dad went hunting, and he always seemed to catch the biggest fish. He was very proud of his 1993-94 bocce trophy from the Calgary Italian Club. Franco was a pioneer of Our Lady of Grace Italian and English Church (now Mary, Mother of the Redeemer), a regular attendee when he was healthy, and a Knight of Columbus. He was a big personality with a big presence and a big love for life.

Nothing made Franco happier than family gatherings, where he could celebrate with Ma’s tomato sauce made from the fruits of his greenhouse and enjoy his incredible homemade wine that was beyond compare. Some of the best celebrations for him were family weddings, baptisms, and his 80th birthday. He had cake with his wife Carolina this year in March for their 65th anniversary while he was in the hospital during his final battle with cancer.

Besides his loving wife, Carolina, Franco is survived by his children, Maria (Leo) Boersma, Antonio Giuseppe Trotta, Luigi (Holly) Trotta, Pina (Antonio) Rino, and Licia (Jim) Haskayne. He is also survived by his grandchildren, Brenda, Darren, Janine, Matt (Michelle), Mark, Dan, Joe (Diana), Rosa, and Megan; and his great-grandchildren, Daniel, Tenoch, Eva, Roman, Verona, and Rocco. Franco is also survived by his sister-in-law Giuseppina Rizzuto and many nieces and nephews. He was predeceased by his parents, Silvio Trotta and Adelina Trombino; his brothers, Antonio and Gigino of Italy; and by many family members and friends - too numerous to name here - who were also pillars of Calgary’s Italian community.

Rest now Pa, your battles are over.

A Private Funeral Service will be held on Tuesday, May 18, 2021. Tributes will begin at approximately 10:45 a.m., followed by the Service at 11:00 a.m. Family and friends are invited to join Franco’s service, streamed live at https://www.youtube.com/watch?v=RE4qKIfoHio. The link will also have a recording of the Service, following the live stream. Condolences, memories, and photos may also be shared and viewed at www.mcinnisandholloway.com.

If friends so desire, in lieu of flowers, please make a donation to support the wonderful and caring staff of Calgary’s Rosedale Hospice who supported Franco in his final days through hospicecalgary.ca. The family requests that everyone respect COVID restrictions and mourn responsibly, according to the regulations.

Share Your Memory of
Francesco
Upload Your Memory View All Memories
Be the first to upload a memory!