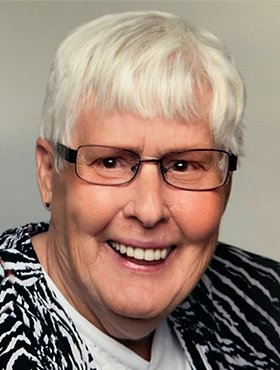 It is with great sadness we announce the passing of Dorothy (Dot)  Ohreen of Calgary, AB on Friday, June 4, 2021 at the age of 88 years.

Dot was born in Gilroy, SK Nov 27, 1932. She attended Mount Rose Elementary School until she moved to Riverhurst for high school. She played in the local marching band and the women’s ball team. In 1951, after graduating from high school, she moved to Moose Jaw to work at the Bank of Montreal, eventually transferring to the Elbow Park branch in Calgary. She met and dated Ed Ohreen in Moose Jaw. Ed followed her to Calgary and they were married July 23, 1955. Children, Diane (Rory) and Karen (Gord) quickly followed, with Anne-Marie and David (Paula) a few years later. Her lifelong support and attendance in the United Church was reflected in her compassion and generosity to everyone she met. She enjoyed painting with her folk art group, volunteering at Foothills Hospital, floor curling, card parties, and friends. She especially loved spending time with her children and grandchildren, Emily, Nicholas, Mitchell and Amy, Natasha and Jacob, Isaac and Rachel; and great-grandchild Odin.

A Celebration of Dot’s Life will be held at a later date. Condolences, memories and photos may be shared and viewed on Dot’s obituary at www.McInnisandHolloway.com.

Share Your Memory of
Dorothy (Dot)
Upload Your Memory View All Memories
Be the first to upload a memory!
Share A Memory
Send Flowers