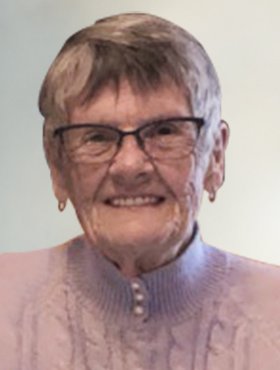 Obituary of Janet May PECIULIS

It is with heavy hearts we announce the peaceful passing of our dear Mom and Nanny, Janet May, on Monday, June 7, 2021, just short of her eighty-fifth birthday.

Born in Lethbridge, and raised in Raymond AB, she was the beloved daughter of James and Maybell Anderson and sister of Robert (deceased), Edgar and Carolyn. At the age of eighteen, Jan ventured to Calgary.

It was in Calgary where she met her future husband, John Francis. Together they raised four children and were proud grandparents of five grandchildren. They were married sixty-one years until John’s passing in 2019.

Jan was a determined, independent, and strong-willed individual. She was happiest when busy. She was a school and hospital volunteer; an accomplished fabric artist at knitting, rug hooking, dyeing and crocheting; an avid fiction reader; puzzle solver; wonderful cook; and master baker. She loved Christmas, music, her two-daily walks, her iPad, and her slots. Most of all she loved her family.

She is survived by her children, Shelley (William), Sandra (Donald), Richard (Kim), and Carrie; and her much loved grandchildren Allyse (Paul), John William, Amelia (Patrick), Reid and Kori.

A Private Funeral Service will be held on Tuesday, June 15, 2021 at 2:00 p.m. Condolences, memories and photos may be shared and viewed on Janet’s obituary at www.McInnisandHolloway.com.