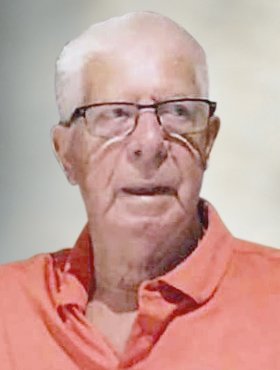 Theo married the love of his life, Elly in 1958, after she immigrated to Canada from the Netherlands.

When Theo moved to Calgary, he continued as a milkman and later became a custodian at Saint Bonaventure for the Catholic schoolboard where he retired in 1996.

Theo loved and had a passion for the outdoors and every spare moment he had he was either riding his bike, playing golf with his friends or going on walks with his family or friends.  Theo’s most memorable vacations were when he went to Myrtle Beach with his daughter and his grandchildren and later on having a trailer on his favorite campsite at Koocanusa Campsite and Marina with his grandchildren.

He will be most remembered for his candid smile and his silly jokes.

Besides his loving wife Elly, Theo is survived by his daughter, Caroline (Frans), of Calgary, AB and son-in-law Rick Rinkel of Mississauga, ON; grandchildren, Darrick (Meghan), Malissa (Ian) of Scarborough, ON, Stacey (Suhwan) of Seoul, South Korea, Mitchell (Lauren) of Airdrie, AB, Steven (Jennifer) of Kelowna, BC;     and two great-grandchildren, Emilia     and Matthew Rinkel of Scarborough, ON. Theo     is also survived one brother, one brother-in-law and five sisters-in-law, Johan and Franka Storimans, Joke Storimans, Corry Storimans, Jan and Corry Wolfs and Jose Berkvens of the Netherlands; one sister Elizabeth van Rooy of Winnipeg, MB; as well as numerous nieces, nephews, cousins and friends. He was predeceased by his daughter Linzi Rinkel (nee Storimans), his parents and his brothers and sisters.

Share Your Memory of
Theodorus
Upload Your Memory View All Memories
Be the first to upload a memory!
Share A Memory
Send Flowers