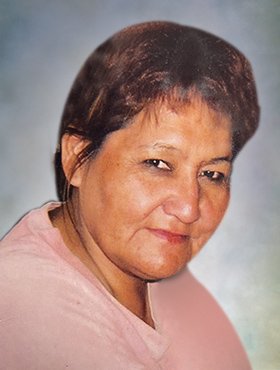 It is with  great sadness that we announce the passing of our Mom, Sister, Gramma, Great-Gramma (which Debra was really proud to be), and Friend, Debra Rabbitt on Sunday, June 6, 2021 in Morley, AB, at the age of 67 years.

Debbie attended Morley Residential School. She was a friendly, caring person, who had a big caring heart. She worked as a bus driver. She did loves of beadwork, and was a strong believer in traditional cultural ways. She participated in many ceremonies, sweat lodges, and Sundances. She enjoyed traditional cooking, such as drying meats, preparing bannock, berry picking, and tanning animal hides.

Funeral Services will be held at McINNIS & HOLLOWAY (Cochrane, 369 Railway Street, Cochrane, AB), on Friday, June 11, 2021 at 12:00 p.m. Graveside Service to follow at Big Stoney Cemetery (Morley, AB).  Condolences, memories and photos may be shared and viewed on Debbie’s obituary at www.McInnisandHolloway.com.

Share Your Memory of
Debra (Debbie)
Upload Your Memory View All Memories
Be the first to upload a memory!
Share A Memory
Send Flowers