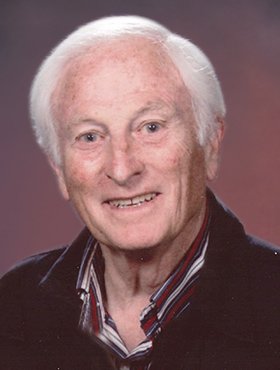 It is with heavy hearts that we announce the passing of Stuart (Stu) George Robbins on Tuesday, June 8, 2021, two years to the day after the passing of his beloved wife and life-long soulmate Pat. Stu was also predeceased by his son Kevin, and leaves behind son Steve and Donna; granddaughters, Hayley and Chelsea; his brother David and Linda; and sister Stella; along with an extensive network of family and friends with global reach.

After growing up as childhood sweethearts, Stu, Pat and the two boys made the bold move to immigrate from Exeter, England to Edmonton, Alberta in 1964 after Stu procured a lectureship position at the University of Alberta in the Faculty of Physical Education, the beginning of what would become a brilliant academic career. While working full-time, Stu completed his Master’s degree in Education at Washington State University and his PhD at the University of Alberta. During this time Stu became a fixture in the Edmonton community and was recognized for his indelible impact on both community and varsity sport. He was the founder and inaugural coach of the UofA Golden Bears Soccer team and led them to their first national title in 1972 a success that was followed by a silver medal in 1973, an outcome declared by Stu “the result of a botch-up.” Coach Stu, as he was fondly addressed, was a national level diving coach and the first Director of coaching for the Alberta Soccer Association, something he did in his ‘spare’ time.

In 1974, Stu moved to York University where he remained until retirement in 2000. During this stage of his career, he was an avid crusader for the importance of sport and recreation in the development of young minds and contributed to the advancement of the Department of Physical Education as it evolved into one of the top kinesiology programs in the country. Upon moving from Edmonton, they settled in Georgetown, Ontario where the family was well recognized in the community. In 2000, Pat and Stu returned to the west, retiring in Calgary to be closer to their cherished grandchildren, a move that provided the opportunity to be actively involved in their academic and personal growth, something that was extremely important to Stu until his final days. Importantly, Stu also stood as a trusted mentor and role model for his son Steve as he followed in his footsteps and embarked on his own academic career.

Stu has received many accolades during his life but of specific note are the Commemorative Medal for the 125th Anniversary of the Confederation of Canada, Canada’s Golden Jubilee Medal in 2002, and induction into the University of Alberta Sports Wall of Fame (class of 2007), and York University’s Hall of Fame (2009).

Stu was an active member of the United Church community where in Edmonton he was a founding member of Southminster United Church and at St. Thomas United Church in Calgary where he was a trusted voice that provided encouragement and comfort to the community.  Whether in academia or in the community, Stu held that “my style of leadership was to bring people together and facilitate people doing things better.” A motto that he hopes will continue in his absence. He is an inspiration for many and will remain in our hearts. A Celebration of Life will be held in his honour at St. Thomas United Church at a future time when restrictions allow for all to participate (Stu was not a “virtual” guy).

Share Your Memory of
Stuart (Stu)
Upload Your Memory View All Memories
Be the first to upload a memory!
Share A Memory
Send Flowers