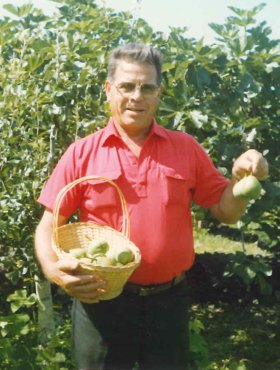 Jose Goncalves Costa, beloved husband of the late, Maria Humberta Costa (nee  Silva ) of Calgary, AB, passed away on Wednesday, June 9, 2021 at the age of 87 years with his children, Eneida, Alice, and Joe; his son-in-law Fernando and granddaughter Meagan at his side.

Jose was born in Santa Barbara, Terceira, Azores on February 20, 1934. Jose joined the Army in 1955, and then immigrated to Saskatchewan, Canada in 1957 to work for CP Rail. He went back to Azores in November 1961 and married Maria Humberta, then returned to Saskatchewan the same year. Jose and Maria Humberta then moved to Calgary in 1965 where Jose started his work in construction. Jose became a Business Agent of the Construction and General Workers Union Local 1111 in 1973 and shortly after became the Business Manager in 1976 to 1990 where he was well respected and revered. Jose had a passion for his vegetable garden, especially his tomatoes.  He also loved to travel and made numerous trips back home after retirement. He will be most remembered for his loyalty and generosity to his family and friends.

Jose will forever be in the hearts of his children, Eneida, Alice (Fernando), and Joe (Nausheen). He will be remembered by his grandchildren, Meagan (Mark) and Matthew. Jose is also survived by his two sisters, Maria, and Alice and one brother Francisco (Margarida); as well as numerous nieces, nephews, cousins, and friends.

A Private Funeral Mass will be held at Our Lady of Fatima Catholic Church (4747-30th Street SE Calgary, AB) on Monday, June 14, 2021 at 11:00 a.m. Mass will be streamed live at youtube.com/Fatimachurchyyc. Graveside Service to follow at Mountain View Memorial Gardens. Condolences, memories and photos may be shared and viewed on Jose’s obituary at www.McInnisandHolloway.com.

Thank you for joining us for the live-streaming of this event. Unfortunately there are times when the internet connection at the venue or where you are viewing from may cause interference and buffering.

Share Your Memory of
Jose
Upload Your Memory View All Memories
Be the first to upload a memory!
Share A Memory
Send Flowers