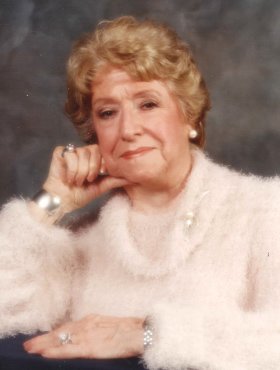 We are very sad to announce that our mother, Thelma Reid, passed away of natural causes on Thursday, June 10, 2021 at the age of 98 years.

Thelma was the second oldest of eight children, growing up in Regina, SK, in a very busy and loving family. Thelma met Lew Reid in Regina, and they were married on September 8, 1951. Later they moved to Winnipeg, MB, where they raised their two daughters. Thelma and Lew moved to Honolulu, Hawaii for two years, they returned to Regina and then settled in Calgary, AB. Thelma was very proud of her lengthy career with the Bank of Nova Scotia, starting as a teller in Winnipeg, and retiring as a Data Systems Analyst in the payroll department in Calgary. She loved her clothes, and of course shoes and accessories had to be colour-coordinated. To say Thelma had a love of shopping was an understatement. She was the best dressed woman we knew and was very proud of her appearance. After retirement she worked part time for a ladies store, she also spent numerous years volunteering at Rockyview General Hospital and loved it. Thelma and Lew also spent many hours participating in Rotary functions and events, their favorites being Stampede and Spruce Meadows (there was shopping there!) Thelma was a strong person with a wonderful sense of humor. She loved being with people, enjoying a cocktail or two and trying her luck at the casino. Her happiest times were with family and she loved having fun with her good friends. Thelma’s eyes always lit up when she could see her great-grandchildren.

To follow Thelma’s wishes there will be no service. Condolences, memories and photos can also be shared and viewed here.

The family would like to thank the caregivers and staff at Amica Britannia on Elbow Drive where Thelma spent the last two years, for taking care of her with compassion and kindness.