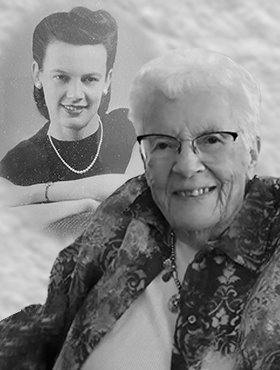 The family of Elizabeth Ann (Betty) Hughes is saddened to announce that Betty passed away on Friday July 2, 2021 in Calgary, Alberta.

Betty Hughes was born Elizabeth Ann Brooks on June 8, 1922 in
Abernethy, Saskatchewan to Allan and Edna Brooks. She spent a happy childhood there with her parents and her two older brothers, Art and Phil, living a typical small town prairie life.

Education and high expectations from education were learned at the knees of her grandparents, who, like so many, migrated west to the frontier of the North West Territory from Central Canada in the 1880s. High expectations gave her an insatiable curiosity and a probing intelligence. She was encouraged by her parents to pursue a higher education so enrolled in Normal School in Regina in 1940.

After a year’s training she taught in country schools near Yorkton and Melville, where she led a very exciting life as a single woman living near a Commonwealth air base. In 1944 she started University in Saskatoon but unfortunately took ill with tuberculosis and was in the Sanatorium at Fort Qu’Appelle for 18 months.

In 1946, she went back to University in Saskatoon, where, as luck would have it, she met Pearse Hughes, from the neighbouring town of Lemberg, Saskatchewan, on the train back home at Remembrance Day and they were smitten. They married on September 9, 1948 in Abernethy and went back to University to finish their degrees in Education and Engineering in 1949. Pearse’s own academic ambitions and curiosity took them to Toronto where he took a Masters degree while Betty supported them by working in her favourite field, books, as a proofreader for the University of Toronto Press.

Pearse’s career took them to Nobel, Ontario where he worked as an aeronautical engineer for AV Roe for a few years. While there, Betty and Pearse started their family when their first child, Ann, was born.

Pearse took a position with Trans Canada Airlines in Winnipeg in 1953, where Betty and Pearse had three more children to join Ann: Joan, David and Tom, in two year increments, the ideal ‘50s family. Betty stayed home for several years raising her family and contributing to her community in Winnipeg, especially through her unceasing volunteer work at Fort Garry United Church, where she was very active in the UCW and the Sunday School, particularly the music program. Summers were spent at “the cottage” at Falcon Lake, a never ending building project for Pearse, a lot of hard work with few conveniences for Betty, as the mother of children in diapers!

In 1971, Air Canada transferred Pearse to Montréal, starting a new chapter in Betty’s life, again actively engaging with the community through Beaconsfield United Church and Ste Anne de Bellevue Curling Club. On top of it all, she went back to school at John Abbott Cegep taking a three year diploma in Library Science. She was proud to serve Beaconsfield High School as the school librarian for close to a decade, some of her proudest moments as an accomplished and liberated woman.

After they retired in 1983, they had a very active retirement life in Beaconsfield and at Falcon Lake, Manitoba. They were able to travel extensively in North America, Australia and Europe visiting family and friends everywhere they went. In 1995, they decided to move to Calgary to be closer to their children, Ann, Tom and his wife, Martha, and their respective children, Robert and William, and Sarah and Jennifer. They travelled regularly to Switzerland to see Joan and her husband, Gary, and their children, Andrew, Michael and Christopher. David was often with Betty and Pearse for summers and Christmas and any other time he could get together with the family.

After Pearse passed away in 2007, Betty continued to live in Calgary, at first in their house in Arbour Lake Villas and for the past few years, in the Arbour Lake Retirement Residence.

Betty had a lively interest in everyone she met and was uncanny in finding connections everywhere with anyone she encountered. This resulted in a treasury of lifelong friendships. She remained in close contact with friends and children of friends from her childhood years in Abernethy. Crowson Bay in Fort Garry yielded a huge number of friends, all raising their young families at the same time, with many coffee “klatches” in various kitchens over the years. Even as people moved to different places, the friendships endured. In Montréal, her world expanded with church, neighbourhood, work, curling, bridge and school. In all of these places Betty made deep connections which enriched her life and that of those she cared about. Calgary was first and foremost about family and she happily babysat, volunteered at her grandchildren’s schools and hosted many family get togethers. She still had time to make lots of friends, through bridge and other activities in the Villas, participating in many social groups at the church, as a member of Confederation Park Seniors Choir, her attendance at various craft gatherings and essentially wherever she went. Her last years at Arbour Lake Retirement Residence allowed her to connect with many new people and amazingly, to reconnect with several from other points in her life.

For years after moving from Winnipeg, Betty looked forward to spending summers at Falcon Lake, especially after the indoor bathroom was installed. Here her family would gather annually to share their love of friends, family and creation. She was never happier than when in charge of feeding lots of people. While spending summers at Falcon Lake, Betty increased her circle of friends through West Hawk United Church and the Winfal Seniors Group where she and Pearse were active in all their events and excursions.

Betty was able to keep up the family tradition of gathering at the cottage until her last visit in 2019. In the last few years she was lovingly cared for at the lake by David and Phil who treasured every minute of her humour, conversations and stories. Few could tell a story like Betty.

Besides devoting herself to her family and friends, Betty lived her life through education, music, faith and service (plus a lot of handwork). In school she memorized many poems and passages from her books so that even in her old age she recited in her imagination as a sleep aid.

Music, both piano and voice, was a comfort. It was always a good reason to get together, whether community singalongs around her piano, playing organs and pianos for church services and Sunday schools, or singing in choirs such as the Confederation Park Seniors Choir that she enjoyed for close to 20 years. She also loved to play the piano with the windows wide open for her own pleasure and that of anyone who happened to be nearby.

The church was central to Betty’s life and remained so until she died. From Knox United in Abernethy, Fort Garry United in Winnipeg, Beaconsfield United in Montreal, or West Hawk United near her summer home. One of the first things that Betty and Pearse did when they moved to Calgary was to join St. Thomas United in Calgary. Even during this recent isolation she was actively watching services online.

Betty’s hands were always busy with handwork projects. Knitting, crewel, needlepoint, petit point, quilting, rug hooking, ceramics, calligraphy, and even paint-by-numbers are part of her legacy, all done out of love, the pursuit of the beautiful, and the good. At the time of her passing she was still knitting a prayer shawl for the church. All of her family members and many of her friends have tangible evidence of her love for them in various things that she made for them.

She was predeceased by her parents, both of her brothers and their wives, her beloved husband, Pearse, and all of his family as well as her dear son-in-law, Gary Goodman.

Funeral Services will be held at McINNIS & HOLLOWAY (Crowfoot, 82 Crowfoot Circle NW, Calgary, AB), on Friday, July 9, 2021 at 2:00 p.m. Family and friends are invited to join Mrs. Hughes’ service streamed live (see below) on the day of the service. For those who are unable to view live, a recording of the service will be posted. Reception to follow in the Hospitality Centre at the Funeral Home. Internment at the Southeast Whiteshell Cemetery at Falcon Lake, Manitoba will be in 2022. Condolences, memories and photos may be shared and viewed on Betty’s obituary at www.McInnisandHolloway.com.

In lieu of flowers, please consider donating to the United Church of Canada or your preferred cancer charity.

Betty's memorial card can be viewed using this link.

Share Your Memory of
Elizabeth (Betty)
Upload Your Memory View All Memories
Be the first to upload a memory!
Share A Memory
Send Flowers