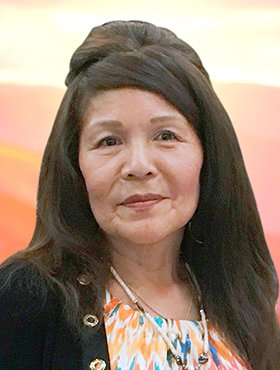 Aileen Runner (A’saanakii – Painted Women), was a caring wife, mother, grandmother, sister, and friend. She passed away peacefully July 11, 2021 at age 54 surrounded by her loving husband and children by her side.

Aileen was raised on the Siksika Nation and married into the Tsuut’ina Nation at the age of nineteen. She worked within a diverse range of areas on the Tsuut’ina Nation. During this time Aileen completed her diploma at Poundmakers NADAP as a Treatment Facilitator and was currently finishing her Degree of International Indigenous Studies at the University of Calgary, along with many other achievements and awards throughout the years. Aileen enjoyed participating in the Calgary Stampede as a Tipi owner and was honored to carry out the Runner family legacy as a member of Tsuut’ina Nation in Calgary Stampede. She believed in her spiritual and cultural ways. When growing up Aileen was actively involved in sports like basketball, baseball and track and field, she also competed in rodeos as a barrel racer.  She owned and was proud of a beautiful bay horse named Boogie, with a white spot on the forehead. Aileen lived her life one day at time and was very protective of her children and grandchildren. She enjoyed life and gained a lot of friendships, with her kind mannerism. Aileen Gail Runner will be greatly missed but never forgotten as she is an angel in everyone’s eyes.

Funeral Service will be held at the home of Shawn and Aileen Runner on Thursday, July 15, 2021 at 11:00 a.m. Graveside Service to follow at Tsuut’ina Cemetery (Tsuut’ina Nation, AB). Condolences, memories and photos may be shared and viewed on Aileen’s obituary at www.McInnisandHolloway.com.

We would like to give a special thanks to Tsuut’ina Nation Chief and Council, and the South Campus Hospital for taking special care of our Mom and family during this tough time.

In living memory of Aileen Runner, a tree will be planted in the Ann & Sandy Cross Conservation Area

Share Your Memory of
Aileen
Upload Your Memory View All Memories
Be the first to upload a memory!
Share A Memory
Send Flowers