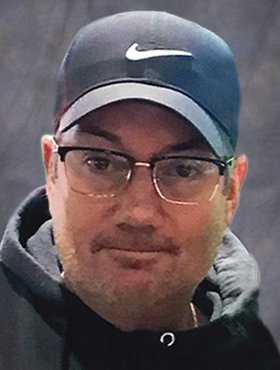 Andrew Kiszczak, beloved husband of Sharon, of Calgary, Alberta, passed away peacefully at home with Sharon at his side on Monday, July 26, 2021 at the age of 49 years after a three-year battle from a non-curable illness. He fought hard and stayed strong, keeping his sense of humor and spirits until the very end.

Andrew was born in Calgary, Alberta, Canada on March 23, 1972. He graduated from St. Francis High School in 1990 and later took a trade in sheet metal mechanics where his work ethic and attention to detail were very important to him. Andrew and Sharon met in 2010 and married in 2013. They shared a love of travel, sports and socializing and built many strong friendships and memories over the years. Andrew accomplished much through his life and was particularly proud of earning a scholarship in basketball. He was also active in baseball and football, playing for the Ram Cowboys. Andrew could always be found watching his favorite teams, the Toronto Blue Jays and Dallas Cowboys, and of course, the Calgary Stampeders. He was always so proud of the vehicles he owned over the years, polishing, and cleaning them endlessly. Andrew enjoyed travelling throughout his life, enjoying vacations in Asia, Hawaii, and Las Vegas as well as many other locations in the US and Canada to watch his favorite sports teams in action. Andrew was very kind, generous and dedicated. He will be most remembered for his loyalty, honesty, and passion about the things he loved, especially Sharon and his family.

Andrew is survived by his wife, Sharon, parents, John and Helen; brother Paul (Charlene), nephew and niece, Justin, and Camryn, all from Calgary; and numerous other cousins, in-laws, nieces, and nephews. Andrew was predeceased by grandparents, Maria and Walter Modnyj and Mike and Maria Kiszczak; Aunt Tamara Modnyj, Uncle Jerry Modney and Uncle Steve Kiszczak.

A Funeral Service will be held at Assumption of the Blessed Virgin Mary Ukrainian Catholic Church (729 – 6th Street N.E., Calgary, AB) on Wednesday, August 4, 2021 at 10:00 a.m.  Reception to follow in the Church Hall. Condolences, memories and photos can also be shared and viewed here.