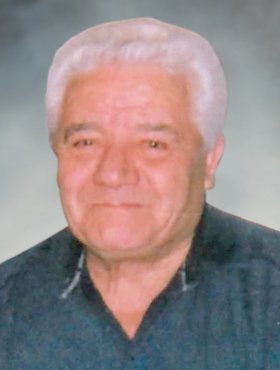 Saverio was born in Marigliano, Napoli Italy on January 5, 1942 into a loving family.

Shortly after serving the Italian military, Saverio received a photograph of his first love Lucia Sciarra. He began his relationship with her through multiple letters sent by mail. Lucia lived in Canada with her mother and so, Saverio decided to immigrate. Arriving in Canada with only $20 in his pocket, a 3rd grade education and uncertainty of the future.

Saverio married Lucia on April 24, 1965. Settling into a new country and far away from any family was not easy, however he did it with a whole lot of courage and determination, with much support and encouragement from Lucia and her family.

He began working in the construction industry as a labourer and eventually earned his way up to foreman and then supervisor. He joined companies Ellis and Don, Cana, PCL and Pokar Construction. He contributed to the development of many high rises in Calgary including the Petro Canada Building, Scotia Centre, Bow Valley Square and many more.

Saverio grew a wonderful garden year after year filled with tomatoes, peppers, onions, carrots, peas and many other vegetables. It was his favourite hobby. You would always hear him singing an Italian love song while he worked away digging and pruning.

He also loved to travel, taking his family on many road trips through BC and to Italy for the summers in hopes they would pick up the vibrant Italian culture he was raised in. It was always a burning desire to take his family to visit his oldest brother who had immigrated to Australia. On this trip, it was one of the happiest moments Saverio shared with his family.

In 1997, tragedy struck when the love of his life, Lucia, was diagnosed with Alzheimer's disease. He was devastated. Saverio was predeceased by Lucia in 2008.

Saverio met the second love of his life Lina Posata, and they were married on August 19, 2007. She brought a new meaning for life to him. She gave him comfort, and a warm-loving home. He was especially fond of her son, Danny; an incredible young caring man, who gave Saverio more purpose. They enjoyed spending time together and continued to travel Mexico, Australia, Grand Cayman Islands, Cuba, Hawaii, Las Vegas, Belgium, France and Italy.

His grandchildren were the joy of his life. He enjoyed watching Saturday afternoon wrestling matches on TV. He also enjoyed demonstrating the stunts on the living room floor with his grandchildren. A few tears were shed but were quickly replaced by devious laughter.

Saverio was met with one last challenge in 2019, stage 3 colon cancer. Not sure if he would survive, he courageously decided to undergo surgery and took the chance to fight for his life. He beat his cancer and received a clean bill of health. Our family has enormous gratitude for Dr. Llyod Mack and the team of healthcare workers at the Foothills Hospital.

Saverio always had a positive outlook on life. He took his trials and tribulation and turned them into lessons and laughter. He took much pride in all that he did, a simple man yet wise and kind. A man with a strong faith in God, who knew he would never walk alone. He loved the best way he could and will be deeply missed by his family and friends.

Those wishing to pay their respects may do so at Mary, Mother of the Redeemer Parish (1714 – 14th Avenue N.E., Calgary, AB) on Friday, July 30, 2021 from 10:00 to 11:00 a.m. With Funeral Mass to be Celebrated at 11:00 a.m. and graveside Service to follow at Queen’s Park Mausoleum. The family strongly encourages those in attendance to were masks. Following the Mausoleum Service refreshment and lunch will be served at the Parish Hall. Condolences, memories and photos can also be shared and viewed here.

Share Your Memory of
Saverio (Sam)
Upload Your Memory View All Memories
Be the first to upload a memory!
Share A Memory
Send Flowers