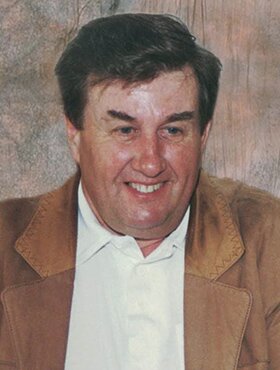 Joseph Robinson of Calgary, AB, passed away peacefully after a courageous battle with cancer on Friday, September 10, 2021 at the age of 83 years.

Merv’s first career was working for Jacques Clothing, then travelling selling veterinary supplies in Alberta, Saskatchewan, and B.C. His final career was selling real estate where he worked his way up to Regional Manger for Royal LePage. He then retired from real estate and opened his own landscaping business which he enjoyed for many decades as he was able to be outside year round.

Dad was an avid gardener, hunter, fisherman and all around outdoorsman. He was a member of the Jeep Club and when the family was younger, they used to travel and camp all over including, Waiporous, Kananaskis and the Yukon. In 1981 they found their paradise west of Caroline where he built a cabin for his family. You could find him cutting down trees, chopping wood and sitting around the campfire telling stories. His children, grandchildren, and future great-grandchildren will carry on his legacy.

In his spare time, Merv loved bird-watching and carving birds. Each of  his children and grandchildren have a carved bird in his memory. He was an active member of the Mount Pleasant Community, Board of Directors for the Calgary Real Estate Board, St. Joseph’s Church and School, and the Ostomy Society of Calgary.

A Private Funeral Mass will be held at a St. Joseph’s Catholic Church at a later date. In lieu of flowers, if friends so desire, memorial tributes may be made directly to the Agapé Hospice, 1302 - 8 Avenue N.W., Calgary, AB T2N 1B8 Telephone: (403) 282-6588. Condolences, memories and photos can also be shared and viewed here.

We would like to thank the kind and knowledgeable staff of Agape Hospice that provided wonderful care for Merv in his final days.