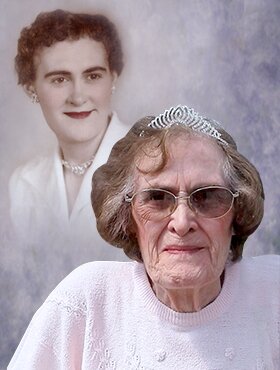 June passed away early in the morning of September 10, 2021. Born in Champion, AB to George and Eileen Morris, the family moved several times by horse drawn wagon to Carstairs, then Sundre, before finally settling near Cochrane. June had many stories from growing up, such as taking horse and buggy to school, picking berries and selling them in town, or collecting water from the river for the neighbour. June then moved to Calgary where she met Mike Fryk. They were married September 27, 1960 and remained together until his passing in November 2017. In May 1966 Mike and June were blessed with Nancy (Paul) and subsequently grandsons, Christopher and Benjamin.

June was an avid seamstress and baker. She sewed and mended clothing for family and friends alike. She made wedding dresses, bridesmaids gowns, and numerous everyday items. She baked cookies, cakes, pies, and numerous other treats, and it was impossible to leave without sampling her latest goods.

June is survived by her brother Terry Morris, grandsons, Christopher and Benjamin Gagnon; and her son-in-law Paul Gagnon, as well as her good neighbours, Chuck & Janalee Eudaily and Eddy & Najah Halat who were always there to help her. She was predeceased by her husband Mike, daughter Nancy, siblings, Billie (Edgar), Cecil (Irene), David (Donna), and Walter.

Funeral Services will be held at McINNIS & HOLLOWAY (Chapel of the Bells, 2720 Centre Street North, Calgary, AB) on September 17, 2021 10:00 a.m. Graveside Service to follow at Queen’s Park Cemetery. Reception to follow at the funeral home. Condolences, memories, and photos may be shared here. In lieu of flowers, donations to your favorite charity can be made.

In living memory of June Fryk, a tree will be planted in the Ann & Sandy Cross Conservation Area by McINNIS & HOLLOWAY FUNERAL HOMES, Chapel of the Bells, 2720 CENTRE STREET NORTH, Telephone: 403-276-2296.