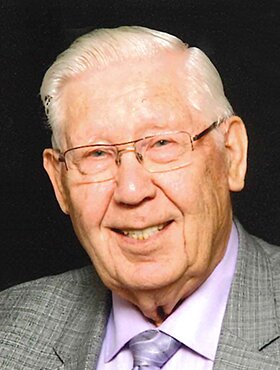 Peter Harder, beloved Dad, Grandpa, Great-grandpa, brother and uncle, passed away on Sunday, September 12, 2021 at the age of 87 years.

Peter was born in Hague, Saskatchewan to Cornelius and Agatha Harder on January 25, 1934. He was in the middle of a large family. Peter worked hard on the family farm and pulled a few pranks along the way.

He eventually worked at 4x Bakery in Saskatoon where he met his future wife, Maxine Florence Sippola. They were married on July 12, 1958 and moved to Kitimat, BC and raised their four daughters.

Peter had a sharp wit and always freely engaged with friends and strangers alike. He was interested in current events and could converse knowledgeably on a multitude of topics. He had a musical interest, initially playing the bagpipes in a marching band and then taking up the accordion. Peter was a lifelong learner whether it be taking courses or understanding the latest technology.

Living so far up north didn’t deter him from making the long road trips to Saskatchewan to visit family. Later he went on to visit his children all over Canada, the US and Europe. He always enjoyed a delicious steak or a great breakfast with the sons-in-law and grandkids.

Peter had a long, successful career at Alcan. He recently returned to Kitimat and enjoyed a tour of his old work place and to his surprise, was able to reconnect with some former co-workers.

Peter’s faith was important to him.  He put his faith in Jesus in his late 20’s. He faithfully desired to follow Him in his daily life. He spent many years distributing Gideon Bibles in the schools in Kitimat and the Fraser Valley and he also served in leadership in his local church.

Peter was a faithful provider and devoted husband to Maxine for 62 years. He has missed her dearly for the past nine months.  He was a wonderful father to his four daughters.

Peter was a friendly, humorous and determined man. We will miss him every day.

Funeral Services will be held at McINNIS & HOLLOWAY (Airdrie, 300 Towerlane Drive) on Saturday, September 18, 2021 at 2:00 p.m. for immediate and extended family. Condolences, memories and photos may be shared and viewed here.

Peter's memorial card can be viewed using this link