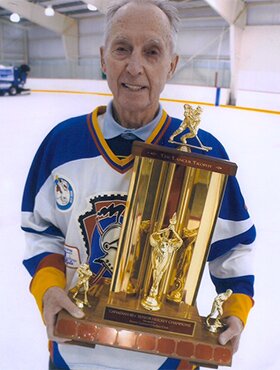 Jim grew up in a large family in rural Saskatchewan and moved to Saskatoon shortly after he was married in the early 1950’s. He and his wife raised three daughters there. He spent most of his working career at the National Research Council on the University of Saskatchewan campus. He moved to Calgary in 1998 to be closer to his family. Jim was a man of faith all his life and was heavily involved in his church for many years. He loved playing baseball and hockey and played in the Calgary 55 Plus Hockey league until he was 88 years old. After retiring he took up violin making as a hobby and he learned to play old time fiddle music by ear. He was the luckiest person alive playing cards no matter what the game was. He was amazingly healthy throughout his life and lived in an independent residence until the time of his death.

The family is holding a private service of Interment. He will be missed. Condolences, memories and photos can also be shared and viewed here.