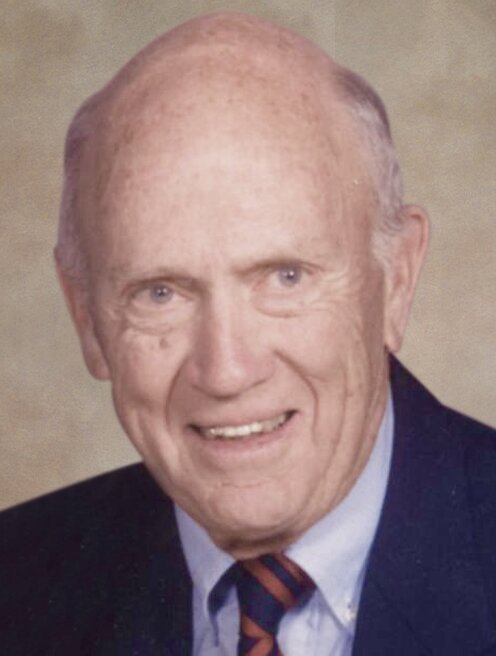 Murray was born on his family’s farm near Carnduff, Saskatchewan in 1923, the son of Edna Jane (Emrick) and Herbert Roy Shier. Growing up in the Depression had a lasting impact and precipitated the family’s move, first to Ponoka in 1936, and finally to Calgary in the early 1940s. During the war, Murray’s goal was to become a pilot but as the RCAF had a surfeit of flyers he re-mustered as an air-gunner in the hopes of seeing action. He enrolled at the University of Alberta after the war, studying geology, leading to his future career in the oil and gas industry. At University Murray met Aileen Jordan Irwin and they married—Aileen in a beautiful blue velvet dress originally meant for Christmas celebrations—at Christ Church, Calgary on Dec. 21, 1948.

To his many friends and family Murray was known as kind, compassionate and considerate. During his years working for Amoco Petroleum colleagues would remark on his mentorship of younger staff and his generosity in giving advice. He loved sports, and enjoyed hockey, badminton, bowling and--passionately--golf. He was a lifelong member and Past-President of the Earl Grey Golf Club in Calgary. Murray was also a devoted fan of big band music (and dancehall dancing in his youth) and cultivated many hobbies, including gardening and bridge, and was drawn to intricate projects he could devote craftsmanship to. He had a passion for geography and history, and a soft spot for animals - especially dogs. He maintained an enviable level of personal fitness and could often be recognized striding the four miles home along Elbow Drive from his downtown office, even during the sometimes polar Alberta winter. Although a difficult childhood made for reservation and caution, his personality shone through in the enjoyment he displayed in the company of others, the evident pride he showed in his children, delight in his grandchildren and great-granddaughters and in his underlying warmth and love of family.

The family would like to express their gratitude to the incredible staff at Trinity Lodge for his long-term care, and to the entire Acute Care unit at the Mineral Springs Hospital in Banff for their dedication and care for him during his last month of life.

A memorial service for Murray will be held in the spring. Condolences, memories and photos may be shared and viewed here.

Share Your Memory of
Murray
Upload Your Memory View All Memories
Be the first to upload a memory!
Share A Memory
Send Flowers