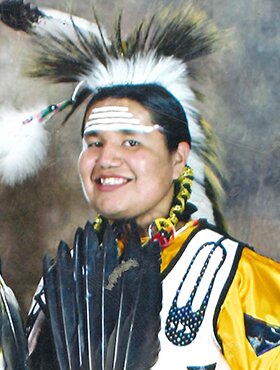 Chase was quite the character, he had a great personality, he always had a smile on his face and made people laugh. Chase lived a full life of love, joy and happiness. He was so kind to everyone he met around the pow-wow and rodeo circle. Chase had many talents, for instance traditional dancing, playing hockey, being a bull-fighter. Chase had dreamed of being a rodeo announcer because he had the perfect voice for it! And refereeing in the WHL because he was good at it.  Whatever he did, he always did it with passion. He worked hard to accomplish his goals and encouraged his family to do the same.  He graduated high school in Mini Thni with his childhood friends and attended the Culinary Arts program at SAIT. he is also the great-grandson of George Crawler, the signatory of Treaty Seven.
Chase was such a good positive and unique person and will be greatly missed by everyone who knew him.

Chase was predeceased by his father Clem Crawler in 2002, his grandmother Shirley Crawler in 2001, his grandfather Donald House in 1991, and his best friend Phoenix Bearspaw (Timmy).

Funeral Services will be held at McINNIS & HOLLOWAY (Cochrane, 369 Railway Street, Cochrane, AB) on Thursday, October 14, 2021 at 11:00 a.m. Wake Services will be held at the residence of Jean Hunter (Morley, AB) on Thursday, October 14, 2021. Graveside Service to follow at Crawler Cemetery (Morley, AB) on Friday, October 15, 2021 at 1:30 p.m.  Condolences, memories and photos may be shared and viewed on Chase’s obituary at www.McInnisandHolloway.com.

Share Your Memory of
Chase
Upload Your Memory View All Memories
Be the first to upload a memory!
Share A Memory
Send Flowers