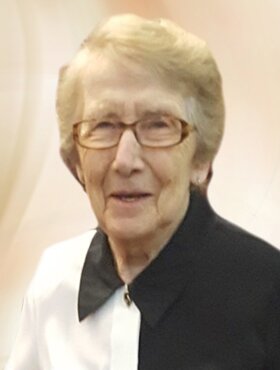 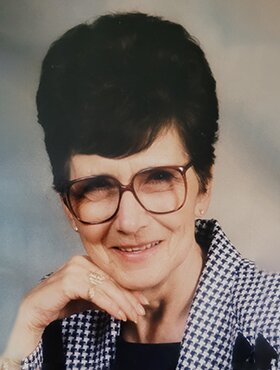 Lillian was born at Grandpa and Grandma John and Caroline (nee Schick) Schlamp's home in the Josephesburg district north of Grenfell, Saskatchewan on October 17, 1929 to Martin and Matilda Golschesky (nee Schlamp).  She was baptized at Grandma and Grandpa Schlamp's and confirmed at Peace Lutheran Church by Rev. Busse.  Lil went to Faulkner School which was a one room schoolhouse, and finished her high school in Grenfell. From there she attended Normal School at Moose Jaw, Saskatchewan to become a teacher, eventually teaching at Faulkner School herself, the same school she went to growing up. She taught at various schools in Saskatchewan, Manitoba and Calgary, Alberta, where she settled.  Lil made many trips home to SK to visit her family as she always said "you can take the girl out of Saskatchewan, but you can't take Saskatchewan out of the girl." Lil's pride and joy was her first car, a 1962 Pontiac Parisienne, which she purchased new before she received her drivers license. Throughout the years Lil owned several new first class vehicles including a 76 Chevy Monte Carlo and an 82 Olds Cutlass Supreme, which she always kept in immaculate condition.  Even the oil didn't get dirty.

Lil's favorite pastime was knitting, she knit many afghans for her family and friends.  Upon retiring, Lil spent time with her niece, June's son Cody who was the highlight of her life.  Lil was a faithful member of Grace Lutheran Church in Calgary.  She moved into assisted living at Chartwell Eau Claire in 2016 and lived there until 2021, then moved to AgeCare Midnapore at the end of June 2021 where she went home to her Lord and Savior on the 29th of October, 2021 at the age of 92.  Lillian was predeceased by her father Martin on October 11, 1977; her mother Matilda on December 20, 1986; her sister Frieda on November 23, 2002 and her sister Florence on March 22, 2013.  Lillian will be deeply missed by her brother, Jack (Joyce) of Grenfell, Saskatchewan; her nieces, June McInnes and son Cody of Calgary Alberta, Shelly Pippin of Regina, Saskatchewan and family Jace (Emily), Amanda and Alyssa; and her nephew Clinton Golschesky of Chiang Mai, Thailand; and her life-long friend Marg Todd of Calgary, Alberta.

Funeral Services will be held at Grace Lutheran Church, Calgary, Alberta, on November 10, 2021 at 4:00 p.m. Pastor Mark Ruf officiating. A Graveside Service will be held at a later date. Condolences, memories and photos can also be shared and viewed here.